I’ve tweaked my blog schedule this week to participate in a blog tour for Janalyn Voigt, whose epic fantasy novel DawnSinger released several months ago. She’s graciously offered to give away one copy of her novel (in your choice of format), so leave a comment if you’d like to be entered. I’ll leave the giveaway open for one week (through August 24th). Without further ado, here’s what Janalyn has to say: 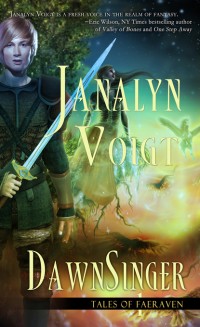 Horses and flying both fascinate me. Small wonder, then, that wild winged horses known as wingabeasts feature in Tales of Faeraven. In DawnSinger, book one of my epic fantasy trilogy, the hero and heroine undertake a perilous journey on the back of wingabeasts.  I want to give the reader a chance to fly.

The wingabeasts of Faeraven are based on Pegasus, the winged horse of Greek mythology. While Pegasus is large and white, as befitting the carrier of thunder on Mount Olympus, wingabeasts come in a variety of colors: silver, gray, black, and gold among them. They also vary in size from delicate to brawny. The smaller wingabeasts have more agility.

Pegasus is said to be the son of Poseidon and Gorgona Medusa and sprang, according to differing accounts, from drops of blood or blood mixed with dirt or blood and sea foam after his mother was decapitated by Perseus. Pegasus struck the ground with his hoof to create the stream Hippocrene in the Helicon Mountains, a place poets drink the water to spark their creativity.

The wingabeasts of Faeraven ran wild in the Maegrad Paesad (Impassible Mountains) until Talan, one of the High King’s of Faeraven, captured one in a memorable ride forever immortalized in the history of his people. After that more wingabeasts were captured, but an untamed remnant retreated beyond reach. The Guardians of Rivenn received the privilege of riding the captured wingabeasts. The creatures’ respond both to touch and sound commands, and will hold still when instructed, even when predators are near. When danger threatens and their riders are not present, as a safety measure, wingabeasts will launch into flight, but later return.

In the Middle Ages, the time period the world of Elderland within Tales of Faeraven is based upon, the winged horse symbolized virtue and wisdom. In DawnSinger, the wingabeasts certainly help those who ride them to that end.

The High Queen is dying… At the royal summons, Shae mounts a wingabeast and soars through the air to the high hold of Faeraven, where all is not as it seems. Visions warn her of danger, and a dark soul touches hers in the night. When she encounters an attractive but disturbing musician, her wayward heart awakens. But then there is Kai, a guardian of Faeraven and of Shae. Secrets bind him to her, and her safety lies at the center of every decision he makes. On a desperate journey fraught with peril and the unknown, they battle warlike garns, waevens, ferocious raptors, and the wraiths of their own regrets. Yet, they must endure the campaign long enough to release the DawnKing—and the salvation he offers—into a divided land. To prevail, each must learn that sometimes victory comes only through surrender. 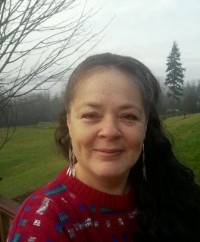 Janalyn Voigt’s unique blend of adventure, romance, suspense, and fantasy creates worlds of beauty and danger for readers. Beginning with DawnSinger, her epic fantasy series, Tales of Faeraven, carries the reader into a land only imagined in dreams.

Janalyn also writes western romance novels, and will publish in that genre under Janalyn Irene Voigt. She is represented by Barbara Scott of Wordserve Literary. She serves as a literary judge for several national contests and is an active book reviewer. Her memberships include ACFW and NCWA.

When she’s not writing, Janalyn loves to find adventures in the great outdoors.

You can find out more about Janalyn and her books on her website or blog.