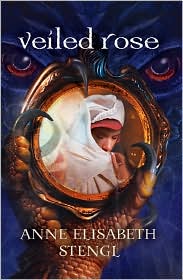 Rose Red trusts no one with her secret. She hides in the forest, her face veiled in rags, shunning the company of all save her old father and her nanny goat. Her life is bleak and lonely.

Until she meets a privileged young man sent to spend his summer in the mountains. Leo, a lonely lad, befriends Rose Red, and together they begin hunting for the Mountain Monster which, rumor says, stalks these lands.

But the hunt which began as a game holds greater risk than Leo supposes. Rose Red can scarcely guess at the consequences should he insist on continuing his search. Dare she trust him with her secret? Or tell him what dwells at the top of the mountain in the cave only she can find?

Above all, when Leo asks Rose Red to leave the mountain and follow him to the low country, dare she agree and risk the wrath of a Monster that is all too real?

In Veiled Rose, a fantasy novel with fairy tale tones, Rose Red hides more than just her face–her whole body remains shrouded behind veils and garments that conceal her form from the world. Despite this oddity, Leo finds in her the friend and companion he’s longed for. In her presence, he can forget his own identity for a time. What begins as a childish friendship and a quest for the Mountain Monster eventually shapes the course of their lives and their homeland in ways they never expected.

In the world of Veiled Rose, different folklore and fairy tale elements weave together to create something new and unique. It’s a richly drawn world, in which the land of Faerie and the land of mortals entwine–and woe to the mortal who treads the Faerie paths unwarily. For the Paths can be used for good or ill, some proving a snare, others leading in ways right and true, their nature beyond the means of mortals to grasp. Yet Rose and Leo must face the dangers of Paths as their journey unfolds.

I didn’t immediately become engaged with the characters, but Rose’s plight in particular made her endearing, and as the story progressed, I cared more deeply about their fate. Rose and Leo are real people, flawed, uncertain, insecure. They each face terrible dangers, but choose different paths, revealing something of their character and identity in the process.

The mystery woven into every page of the book kept me intrigued and connected with the story, even before I fully identified with the characters. Not once did I feel I knew exactly how the story would turn out, even though it overlapped the timeline of Heartless, the first book in the series. There’s an intensity to the tale, one that escalates as dangers beyond their reckoning stalk Rose, Leo, and lands of the Near World.

In the midst of all these story events, different threads of meaning converge. We see courage versus fear and the impact of a single choice. We witness that it’s what is inside a man that drives him to sin, not the circumstances around him, and we behold what makes a monster–the very thoughts and attitudes of the heart. Through it all, the story reveals that in our fallen state, we are powerless against evil. Veiled Rose shows external evil vividly in the form of Lady and Dragon, and the preying weakness within through the struggles of the characters. Yet it doesn’t stop there, but also shows the beauty of redemption–that though we are powerless, there is one with power, steadfast in love and determined to protect all who seek his strength. The spiritual elements are naturally woven into the story and the world, indeed without them, the plot would disintegrate…which is as it should be.

While Veiled Rose borrows from the fairy tale tradition, it doesn’t have a typical fairy tale “happily-ever-after.” In fact, while the story does resolve, it’s clear there is much more to come in the sequel Moonblood. The stories of Leo and Rose Red will continue, and I look forward to taking the journey with them.

Suffering and hope, pain and redemption, and the multifaceted beauty of love come to life in the pages of Veiled Rose, interwoven with deeds of faeries and dragons, royals and monsters. This book succeeds in both engaging the imagination and leaving something of value to consider afterward. I highly recommend it for fairy tale lovers–and others will find much to enjoy as well.

As an aside, I personally couldn’t engage with the Heartless (despite the fact it just won a Christy Award), in large part because I couldn’t identify with Una (the primary character). So if you read Heartless and it wasn’t your favorite tale, I suggest giving the series another chance and picking up Veiled Rose. I’m glad I did.

While each has their own unique style, the skilled crafting of fairy tale elements is something that Anne Elisabeth Stengl and CS Lakin share in common, so if you’re looking for more fairy tale inspired Christian fiction, you might check out Lakin’s work as well.

The Responsibility of the Storyteller