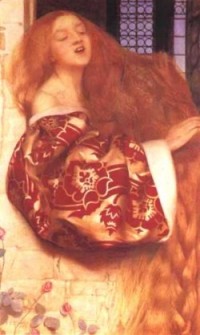 One of the most intriguing aspects of fairy tales is the way they change across time and culture, yet still remain identifiable as the same story. In Rapunzel, the core element marking the story involves a maiden in confinement, but the rest of the tale undergoes a number of variations.

The stories almost always begin with a pregnant mother craving an item growing in the garden of a supernatural being (ogress, fairy, witch, enchantress). Consumed with longing, the mother determines she must have the coveted item, no matter the cost. She might crave parsley, rapunzel (a form of lettuce), or rampion, but no matter what she desires, it’s forbidden or out of reach. Sometimes she goes herself to claim the the object she craves (Petrosinella), other times she sends her husband (Persinette, Grimms’ Rapunzel). Whether the mother or father goes to fetch it, they willingly give up their child to keep their own lives–though in some tales, the husband condemns the wife, saying her gluttony caused this painful loss (Prezzemolina). In certain tales, the parents get to keep their daughter for several years (Petrosinella, The Fair Angiola, Prezzemolina), in others the supernatural being immediately claims her (Grimms’ Rapunzel, Reptensil).

In an alternate beginning, sometimes the supernatural being grants the desire of the parents for a child, with the stipulation the child will belong to her after a period of time (Anthousa, Xanthousa, Chrisomalousa). The parents, thinking it better to have a child for some time than none at all, agree to the demand, again sacrificing their child to an unknown danger to satisfy their own desires.

Regardless of how the tale begins, it always develops with the maiden finding herself in some sort of confinement. On occasion, the maiden isn’t literally locked in the tower, but is merely captive to the supernatural beings, who force her to do impossible tasks under threat of death (Prezzemolina, Prunella). In these tales, Rapunzel’s love helps her with her impossible tasks, becoming the means of sparing her death and his repeated care and aid to her result in her falling in love with him and agreeing to become his bride.

In the stories where the supernatural being locks Rapunzel in a doorless tower, she spends years there before being discovered by the man who will become her husband (usually a prince). Sometimes her beautiful voice draws him (Grimms’ Rapunzel) or the loveliness of her flowing hair captivates him (Petrosinella), other times the prince is under a curse of his own compelling him to seek a beautiful maiden locked in the woods (Anthousa, Xanthousa, Chrisomalousa). Wha 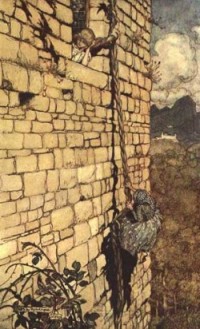 tever draws him, the prince only gains entrance when Rapunzel lets down her hair and pulls him up.

Once the prince enters the tower and meets the maiden, he falls in love with her and becomes a repeated visitor, but they can share no real future until she escapes her confinement. In Petrosinella, Rapunzel herself strategizes a means of escape from the ogress, and they gain their freedom through her cunning, which results in the ogress’s death. In other tales, the couple undergo years of suffering before they can be reunited, as the supernatural being discovers their intentions and banishes Rapunzel to a wilderness. Then the enchantress waits in hiding for the prince, who either jumps from the tower to escape or is pushed by the enchantress (Grimms’ Rapunzel, La Force’s Rapunzel). Either way, he falls upon thorns which blind him and wanders the world sightless until he finds Rapunzel (and in some cases, their children). Her tears fall upon his eyes and restore his sight (Grimms’ Rapunzel, Persinette, Schultz Rapunzel). Together they return to his kingdom and live happily ever after.

Whatever the nature of the trials endured or mistakes made, the Rapunzel stories share in common a happy ending (which doesn’t always occur in fairy tales, contrary to popular belief).

I’ve covered the origins and major variants of the tale, so I’ll discuss some of the themes next Friday.

Tolkien Speaks on Lord of the Rings