A man steps through the wall and enters a long-hidden city, concealed in stone beneath the crust of the earth. Surely such a tale belongs to the realm of fantasy. Yet it happened in our world, and more than once.

In the 1960s, a man in Derinkuyu, Turkey planned to expand his cave home, only to find, upon breaking through the wall a mysterious room, carved from rock. One hidden room would be fantastic enough, but this led to the discovery of an underground city, a network of corridors 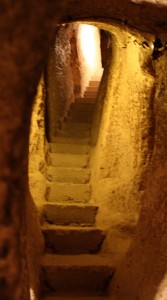 , chapels, stables, kitchens, wine and oil presses, bedchambers and storage rooms. Derinkuyu’s underground city has vast dimensions, capable of holding up to 50,000 people. Its eight levels (possibly eleven, but only eight explored thus far) may not compare to the Mines of Moria in intricacy of design of beauty, but vaulted ceilings stretching up to ten feet in the chapel, massive round doors of stone—weighing between 400 and 1000 pounds each—and long staircases all reflect skilled craftsmanship.

Incredibly, similar underground labyrinths sprawl under miles of territory in the Cappadocia region of Turkey. Some estimate one hundred distinct cities, others more, only a handful of which have been explored. Ozkonak, one of the better known cities, like Derinkuyu, owes its discovery to a local landowner. Bewildered by the mysterious run off of his crop water, he investigated and found an underground room. Further excavation revealed a ten-level underground city, replete with ingenious defensive features, complex ventilation networks, and water systems. These cities, alon 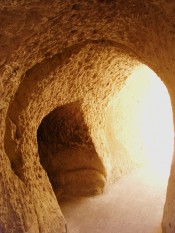 g with many others in the region, contained everything necessary for thousands of people to live and work for months at a time, serving as refuges from enemies, and in several eras, dwellings for persecuted Christians.

Despite offering everything needed to live underground, these cities were not used as permanent residences. Evidently humans don’t take to living underground quite as well as dwarves, even with all the necessities provided for!

Would you be able to endure living underground, with no sunlight, no moonglow, no wind on your face? Would it make a difference if your surroundings were spectacularly beautiful, like the Mines of Moria before their downfall, or more rustic, like the real-life underground cities in Cappadocia?

For Want of Wonder