Thoughts on The Voyage of the Dawn Treader 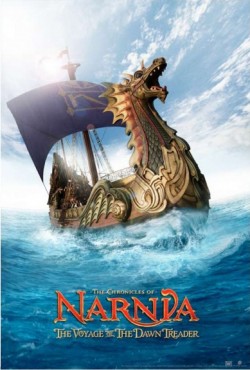 Over the past several weeks, I’ve witnessed much discussion online regarding The Voyage of the Dawn Treader movie, with many individuals addressing valid concerns–the focus on conquering darkness by one’s own strength, generic moralistic lines scattered throughout the film, the heightened rivalry between Edmund and Caspian, and so forth. But while many disliked the adaptation, I’ve also heard from people who enjoyed the film and thought it captured well what they loved about the novel.

After experiencing Prince Caspian, my expectations  for the film remained low. I tried to enter the theater with the awareness that differences between the written word and film would necessitate some changes to the storyline. As an aside regarding substantive changes between book and film, CS Lewis expressed his profound displeasure with this practice when he witnessed it done in his time. Regarding the claim that a book must be dramatically  altered to support cinematic demands,  he said “It would have been better not to have chosen in the first place a story which could be adapted to the screen only by being ruined.”  Based upon his own words, I cannot help but think he would have been less than enthused about The Voyage of the Dawn Treader’s adaptation. But at any rate, when I went to see the film, I tried to remove the book from my mind and pretend that this was a fresh tale…and so doing I found that I did not enjoy the movie even in its own right. It fell flat for me, both as an original tale and as an adaptation. That lead me to consider why–what was the difference between the film and the book, that one could captivate me and the other leave me cold?

For me, the key difference was the change in the very purpose of the tale. The film stripped away the driving motives for the original journey, a heroic quest taken not because evil threatened to overtake the entire world, but because Caspian and his companions desired adventure and yearned to seek after the hidden and unknown things.

This can be plainly seen in the book when they discover the last remaining lords on Ramandu’s Island and find that to break the enchantment over the three sleepers they must travel as close to the World’s End as they can. At that moment, Caspian says, “even if it were not so, it would break my heart not to go as near to the World’s End as the Dawn Treader will take us” revealing the greater motive propelling him onward from the beginning. And Reepicheep echoes a similar sentiment even more strongly, caught up in the grand vision of finding Aslan’s country, no matter the cost, “My own plans are made. While I can, I will sail east in the Dawn Treader. When she fails me, I paddle east in my coracle. When she sinks, I shall swim east with my four paws. And when I can swim no longer, if I have not reached Aslan’s country, or shot over the edge of the world in some vast cataract, I shall sink with my nose to the sunrise…”

Going a step further, toward the very end of the story, when the outward quest reached total fulfillment–the lords found and the enchantment broken–Caspian still yearned to see the World’s End, and was even willing to forsake his kingdom, so strongly did he desire it. In these occurrences, we see the greater journey, the chief desire, the sense of wonder experienced when exploring uncharted territories and pursuing that which is outside of the knowledge of man.

This sense of anticipation, of wonder and exploration, of glorious vision was exchanged for a generic fantasy mash-up plotline, one of an evil green mist, a vague, nebulous force threatening to overtake and corrupt the world for absolutely no reason. In the film, Caspian and crew continue on the journey because if they don’t succeed, they will die and all of Narnia will be consumed by evil…quite a different emphasis from the original, and one altogether lacking in its own right, due to the fashion it which it was crafted.

To be clear, I have no objection to stories seeking to save the world from an evil foe, after all, such is a staple of the fantasy genre and a storyline I often enjoy. But even those stories derive strength from showing the beauty and worth of that which the characters seek to preserve. In Lord of the Rings, Frodo thinks of the safety of his beloved Shire and the innocent citizens and this gives him boldness to go on. We’re shown the good, that which is valued and cherished, and it gives greater meaning to the battle against evil, as well as imparting the determination and perseverance needed for the fight. Granted, the movie gives a few token nods in this direction, but we are never really shown a glimpse of true Narnian wonder and beauty until the end, when evil has been defeated. And that moment, when we get a glimpse of Aslan’s country, was for me the only meaningful part of the film.

All that said, I know many have different views on this, and I’m interested in other perspectives. Have you seen the movie? I’d like to hear your thoughts, whether in agreement or dissent!

The Power and Significance of Story