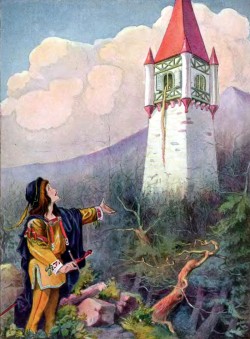 Like many fairy tales, Rapunzel has received quite a bit of scholarly analysis, resulting in a variety of ideas regarding the themes and meanings of the tale. If you’re interested in this sort of study, Folk and Fairy Tales: A Handbook by DL Ashliman* contains several references to Rapunzel and might provide a good starting point. However, the themes I want to discuss here are those that have emerged from my personal readings of the various renditions of Rapunzel, threads that run through almost every version of the tale.

One of the clearest story themes relates to the allure of forbidden fruit and the painful cost of succumbing to its enticement. In Petrosinella, the story begins to unfold this way, “There was once upon a time a woman named Pascadozzia. As she was standing one day at a window, which looked into the garden of an ogress, she saw a beautiful bed of parsley, for which she took such a longing that she was on the point of fainting away; and being unable to resist her desire, she watched until the ogress went out, and then plucked a handful of it.” The eventual consequence of her transgression is the life of her daughter. In most variants of the Rapunzel story, the desire for forbidden fruit, the surrender to temptation, and the painful results are the same, a sequence of events that carries echoes of choices made in the Garden of Eden.

Another prominent element of the tale is the lack of loving parental figures. Rapunzel starkly illustrates what a child endures when the authority figures in his or her life think more highly of their own good than that of their children, rather than acting in sacrificial love. Both the parents and the ogress are looking out for their own interests–the parents to save their own lives, even if it means their daughter might die as a consequence, and the ogress seemingly to serve her own desire for control. No question, Rapunzel suffers because of their self-love, and the entire tale illustrates the price she pays as a result.

Yet the story isn’t entirely bleak, and the most redemptive theme of the story relates to finding freedom. Many of the individuals in the tale are enslaved–the mother to her own desires, the father to the will of his wife, the maiden to the ogress and the tower. While the story chronicles no change in the parents, Rapunzel herself gains freedom, though sometimes at a high cost. In Petrosinella especially, the search for freedom takes prominent role. After years confined in the tower, Rapunzel catches a glimpse of the outside world–the one she was meant to live in–when the prince arrives. Once she recognizes the extent of her bondage, she’s willing to undergo any risk in her endeavor to escape. She watches and waits to learn how she might gain her freedom, and when she overhears a conversation between the ogress and a local gossip, she seizes the opportunity to attempt flight…even though the endeavor could mean her death. She and the prince successfully escape (unlike in other versions of the tale where they endure years of suffering first), and once they have found freedom, they joyfully enter into marriage. Petrosinella ends with this fitting line, “One hour in port, the sailor freed from fears, forgets the tempests of a hundred years.”

Despite the difficult situations the tale illustrates, it ends on a jubilant note, celebrating both freedom from bondage and from the past.

Next week, I’ll wrap up the series with a look at some of the modern renditions of Rapunzel, including the recent Disney film Tangled.

*I’ve only read a few brief excerpts of this book and cannot vouch for content.

The God Hater, Day 3: A Look At Allegory