The World of E-books: Booktracks 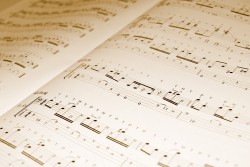 As the world of books and publishing evolves, perhaps it’s natural that people began to consider the fusion of books and music. For some time, writers have shared the soundtracks that accompanied the writing of their books or suggested complimentary music. And with e-books came them opportunity to integrate the two in a new way with book soundtracks.

Most developers of book soundtracks assume that since music is essential to movies, it will add value to books also and serve to improve the overall reading experience. Yet with films, we’re relying on what we see externally to create the world, not on our own imagination.

While such notions may have floated around for a time in various forms, the idea coalesced over the past year and led to the launch of a small company called Booktrack. They sought to create “synchronized soundtracks for e-books that automatically matches music, sound effects and ambient sound to your reading speed to create an immersive reading experience.” The concept and the technology is interesting, but the trouble lies in the difficulty of synchronizing with the individual imagination–an imagination that fuses its own sounds into a story.

The founder of Booktracks also suggested that booktracks “make it fun to read again.” Perhaps that’s why I’m not the idea audience for such an invention. I’ve always thought of reading as one of the best forms of entertainment, never something dull or boring. If a booktrack interests a non-reader and causes them to read more, it could have some value, but I think it’s less likely to engage long-time readers.

For my part, I enjoy books and music both, but I prefer them separate from one another. I’m not the sort of person who plays even the quietest music in the background when I read a novel. When I read a novel, I’m immersed in that world. The ebb and flow of words provides its own music, and other rhythms would break that fictive dream. Perhaps booktracks might pleasantly surprise me, but somehow I think not. I don’t want an intrusion into the world in my mind, however pleasant the music might be on its own.

What do you think of the idea? Have you ever tried an e-book with music? Would you?