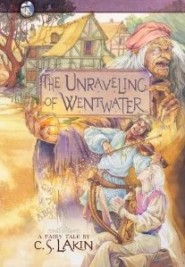 In her Gates of Heaven series, CS Lakin has drawn inspiration from beloved fairy tales and used them as a launching point to create new stories. While not an actual fairy tale retelling, The Unraveling of Wentwater incorporates aspects of Sleeping Beauty and The Six Swans into a novel that demonstrates the power of words and the impact of mercy.

I’ve read all four books in the Gates of Heavens series, and each one improves upon the last. Every book incorporates one of the seven sacred places founded by heaven to protect the world, and these places become cornerstones to the stories.

The villagers of Wentwater and scholars who dwell on the heights don’t remember the gate of heaven hidden nearby. They’re blinded by their own values, the things which they hold as sacred. For the villagers, it’s deep superstition that shapes every waking moment. And for the scholars, it’s an obsession with academics and knowledge. Both neglect true wisdom, and this neglect will prove to be their undoing.

As the story unfolds, a young woman named Taralyn begins to breech the gap between the two realms. She yearns for freedom to love and create, for values she doesn’t see fully displayed in the village or on the heights. She travels between the village and the mountaintops, unaware of her true heritage and how her choices will set into motion the prophesy that she received at birth.

When Wentwater literally begins to unravel, Taralyn the only one who can intervene and possibly save that which has been lost. She has a choice–leave and gain her own happiness or attempt to redeem the village of Wentwater through her suffering.

In general, fairy tales illustrate life principles, and this one is no exception. It contrasts mercy and justice, knowledge and superstition, selfishness and sacrifice as Taralyn and those around her make choices for good or for evil.

In The Unraveling of Wentwater, CS Lakin has woven a fairy tale for a new generation, one infused with Scriptural principles and the creativity of fresh words and worlds. Fairy tale fans should consider adding this to their collection.