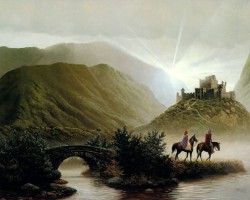 So many fantasy stories take the form of quests, with the characters on some sort of journey in which they seek to make wrong things right. At the conclusion of a series I recently finished, the hero reaches his rightful home and gains the inheritance stolen from him as a child. Through the battle to reclaim his birthright, oppressors are vanquished and a kingdom restored. On the surface, this storyline may seem cliched, carrying echoes of countless tales before it, yet when handled rightly (as in this series) these stories of quests, of suffering and perseverance, and ultimately of battles won and inheritance claimed resonate within the human heart–no matter how many times we read similar stories.

In these tales we witness the conclusion of the journey, but life on this earth hasn’t reached its final resolution–we’re still caught between the choice to venture on a difficult quest and its fulfillment. We’re on a pilgrimage of sorts, seeking the New Jerusalem and the joining of heaven and earth, looking for our rightful home, the heavenly city come down. We know things aren’t right, and we long for restoration. Even the earth itself groans for the coming redemption. In quiet moments, we catch glimpses of the beauty and glory to come, and we find strength to continue our quest. We press through the long, weary stretches and the battles that seem certain to end in defeat. We enjoy the mountain-top moments and small respites along the way, knowing that one day, we will reach our destination. Like the heroes in many a tale, we will gain our inheritance and see the kingdom, the realm of this earth, restored.

So in the meantime, we engage with stories that transport us to other realms, other journeys, other quests taken, victories won and kingdoms restored–and we remember the coming glory of the final victory and our destiny for eternity.

Does this aspect of fantasy resonate with you?

JRR Tolkien as an Illustrator