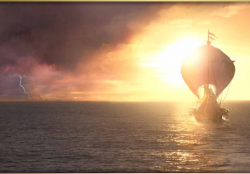 I ran across an intriguing interview CNN did with fantasy writer Lev Grossman, whose novels have landed on the NYT bestseller list. I’ve never read anything he’s written, but I perked up at the mention of him finding inspiration in Lewis, particularly The Voyage of the Dawn Treader. Though Grossman attributes Lewis and others with inspiration for his novels, he takes a different approach and his “magic takes place in a more cynical, profane and darker, modern world.” Based upon that, it doesn’t sound like he’s followed in Lewis’s footsteps, but I still found his words on the fantasy genre of interest.

CNN: How do you think the fantasy genre has changed, since the Narnia books were published, even since Harry Potter?

Grossman: It’s changed a lot. For one thing, Lewis and Tolkien were profoundly Christian writers. Their faith was a big part of their lives, and that comes through in what they wrote. I think fantasy has become more secular since then. Magic comes in a lot more flavors now, not just the divine.

Just look at Harry Potter: There’s no Aslan, no praying. It’s all wand-waving: swish and flick. It’s very different from what Lewis was doing. But even since Harry Potter, a lot has changed. So many more people are reading and writing fantasy than before, and I think as a result of that, fantasy has exploded in all kinds of different directions. It’s evolving at a furious rate. Writers like Neil Gaiman, Susanna Clarke, China Mieville, George R.R. Martin, Kelly Link — they’re doing things with fantasy Lewis and Tolkien would never have believed were possible.

I want to see the day return where Christian writers make such a deep cultural impact that the ripples are still felt long after their deaths. I don’t know what it will take exactly. Sometimes I have a sense that people think it will happen if we join in the secularization of fantasy–that if we just make our works darker and grittier and omit any hints of a spiritual thread to our stories, then we will connect with the prevailing culture. Yet Lewis and Tolkien served as inspiration to countless readers and writers, even with their faith distinctly present.

So it’s not that we need to omit spiritual realities, it’s that they need to be a seamless part of the whole. We need to reach new levels of creativity and excellence in craftsmanship, as the Inklings did in their time, and in so doing, set the benchmark for future generations. Easy to say, but not nearly as easy to do. I plan to explore this more in coming posts.

In the meantime, what do you think of his perspective on the secularization of fantasy? Do you see this happening?