The Rocks of Death Valley: A Mystery 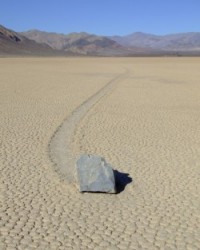 I don’t know about anyone else, but earth’s inexplicable mysteries intrigue me. So it was with some interest that I recently read of rocks traveling great distances on their own, leaving a trail behind them to mark the paths that they’ve wandered. This phenomenon occurs in Racetrack Playa located in Death Valley, as well as other playas across California and Nevada. These dry lake beds, formed in desert environments, become shallow lakes when the occasional rainfall reaches the desert, their dry cracked earth transforming into a mud slick buried beneath inches of water.

Within the playa, rocks small and large (some up to 700 pounds) slide across the dry ground, making all sorts of mysterious patterns as they travel, sometimes in unison with each other, other times at odd angles and seemingly random curves. No one has witnessed the rocks in motion, but based on the trails they leave behind, they’re believed to move as fast as a walking human, often at a slight uphill incline.

As you might guess, the moving rocks have attracted the attention of scientists for over 70 years, and a variety of theories have been proposed to explain the mystery. Every study thus far  found no correlation between rock size and how far or in what direction they travel, but the trails are so distinct that it’s clear no human or animal took part in the 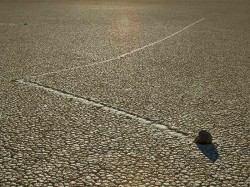 movement. Different studies also eliminated the possibility of strange radiation or unusual magnetic fields. Of course, over the years, various individuals concocted bizarre theories of aliens and similar otherworldly happenings, but the most plausible explanation relates the wind rushing over the playa.

From the beginning, the wind emerged as a strong contender to explain the rock’s movements, but the only problem was that the winds would have to be 150+ MPH (hurricane force winds) to move the larger rocks. So scientists began to study what elements might reduce friction and allow lower wind speeds to create motion. One theory propertied that bacteria growth on the bottom of rocks might create a layer that would allow the stones to glide more easily. While that hasn’t been disproved, a more favored explanation is that a collar of ice forms on the bottom of the stones from mountain water trickling d 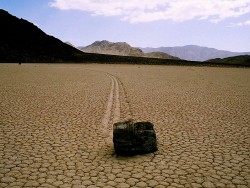 own into the playa and freezing at night. This slick coating would allow the rocks to move with the wind until the point that the ice fully melted. Still, no one knows for sure and until a cause is proven, the mystery of the roaming rocks will continue to intrigue scientists and tourists alike.

Since this is an imaginative bunch, I’m sure we can come up with our own unusual explanations. Perhaps giants stand on the mountaintops and see how far they can skim the rocks. Or…you fill in the blank. Anyone want to make an attempt?

Long or Short Novels: Which Are Better?