The Realms Thereunder, Day 1: A Review 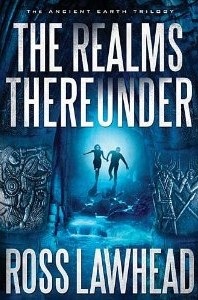 While in an ancient church during a “time between times,” children Daniel Tully and Freya Reynolds find themselves pulled into a dangerous underground realm, where creatures of folklore and myth abound. Freya wishes nothing more than to escape this frightening place, while Daniel responds with excitement over the opportunity to prove himself a hero.

In the telling of The Realms Thereunder, these childhood adventures intersect with adult lives of Daniel and Freya, and we witness how their experiences underground have shaped the course of their futures. Freya now suffers from OCD and an unshakable fascination with folklore while Daniel roams the streets fighting the evil he first confronted in the realms below ground.

Intermingled with the past and present experiences of Daniel and Freya is officer Alex Simpson’s investigation into strange occurrences caused by the mythic realms that are beginning to bleed into the surface realm of Earth at an increased rate.

Perhaps the greatest strength in the story is the complex plot. Intersecting storylines that occur in past and present keep the book moving along at a fast pace and arouse curiosity. The Realms Thereunder is constructed rather like a puzzle, and by the end, we see how the pieces from different times and places all fit together. Occasionally, however, it felt like the switches came too frequently and just as I became engaged in a storyline, Lawhead jumped into another thread of the tale, which distanced me a bit from the story.

In my opinion, the characters faded to the background in a story more driven by plot and the “cool factor” of various mythic creatures, hidden realms, and sleeping knights from days of old. The underground realm, peopled with all sorts of legendary beings, is a fascinating one, and a strong British tone marks both the portions of the story set in the underground realm and in England, thanks in part to the use of Anglo-Saxon folklore.

Given that The Realms Thereunder incorporates legends that many other fantasy novels also borrow from–with trolls, dragons, elves, and more–there are definitely echoes of the familiar here, yet Lawhead manages to put his unique angle on these old tales.

Questions regarding life, death, and the ultimate reality abound, but directly Christian elements are kept to a minimum. Nevertheless, The Realms Thereunder operates from a mostly Biblical framework through which concepts of truth, good and evil, and the unending battle against darkness are explored.

In many ways, this book reads like a prologue for things to come, laying the foundation for an epic conflict against a strong and cunning opponent. For several reasons (primarily related to characterization and writing style), it didn’t me grip me in a way that would make it stick with me afterward or prompt a reread. Despite that, I’ll probably continue a little longer with the series and see if it grows on me as it unfolds.

If you like urban fantasy with undertones of suspense, this one may be for you. For other fantasy fans, it’s mildly recommended.

Perhaps it will come as little surprise, but the author I’ve read that most resembles Ross is his father, Stephen Lawhead. Yes, differences exist between their books, but they are both heavily influenced by British mythology (though Stephen typically pulls from Celtic mythology and Ross from Anglo-Saxon) and the way they fuse this lore with the everyday world gives their works a similar feel.

If you’re interested in learning more about the book, I encourage you to visit the other tour stops: