The Price of Victory 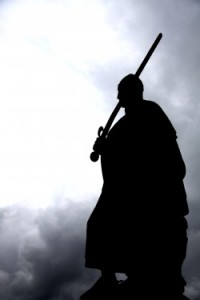 Recently I read a book (which shall remain nameless), in which the author built up the danger posed by the enemy through the entire story. As the plot progressed, the protagonist spent much energy to find the antagonist and prevent his evil deeds from coming to full fruition, but when the confrontation with this dreadful foe finally comes, the protagonist vanquishes him and undoes all his deeds with only slight effort. There was no cost to the triumph, and no sense of satisfaction in the victory.

One reason is that it preserves the integrity of the story. If you have suggested the antagonist possesses great power, than his defeat shouldn’t be a flippant matter, or you lose the momentum built over the course of the book. In fact, the greatest victory of all time (the resurrection of Christ) came at the greatest cost (the Cross), and stories resonate with that truth when they reflect the price of victory. The turning point–that moment when victory is won after all seems lost–gains meaning when it comes with sacrifice.

Lord of the Rings, for example, would have lost much of its impact as a story if Frodo and Sam marched up to the Cracks of Doom and tossed in the Ring unimpeded–no harm, no struggle, the enemy vanquished merely by their choice to make the endeavor. Rather Frodo and others sacrifice much to preserve Middle Earth. The shadow of loss touches them, their path to triumph isn’t easy, but even their loss ultimately becomes redeemed. Through the price they pay, the victory has greater meaning. That holds true for most stories, I believe.

What do you think? Have you read books where the ending fell flat or the victory seemed impossibly contrived? How did that color your view of the book?

Book Giveaway: Monster in the Hollows by Andrew Peterson