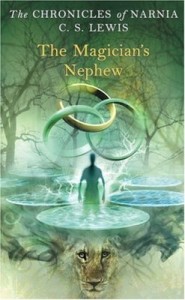 At the end of March, Walden Media announced they would go back to Narnia’s beginnings and film The Magician’s Nephew, rather than tackle The Silver Chair, as expected. Since they’re still in the discussion stage, most likely it will be several years before the film makes it to the screen, but the online chatter has already begun.

Walden Media is operating under the premise that The Magician’s Nephew holds the title of the most popular Narnia book after The Lion, The Witch, and The Wardrobe (I’m not sure how they arrived at that conclusion), therefore, the film will do as well as the first one–and certainly better than the last two. But I think they’re missing the point. From my perspective, Prince Caspian and The Voyage of the Dawn Treader performed poorly because they missed the emotional core of the books from which they were derived, not because they were based on less popular tales. Comments from the director of The Voyage of the Dawn Treader showed a profound lack of understanding regarding the book, and the film reflected that.

If they take a different approach to The Magician’s Nephew and manage to capture the elements that make it so compelling, I expect it will do well. There’s so much to love about this story, and so much material to draw from–an intriguing storyline, characters thrown into circumstances far beyond their means to handle, and the full range of emotion from joy to terror.

Others may have a different desires, but in a film version, I want to feel the wonder of exploring new realms and the first glimpse of Aslan, and witness the stark contrast between a world dying in despair and a world freshly breathed to life by the song of its Creator. I want the film to display what it means when one choice introduces sin into a sinless world, the suffering and redemption that spring from that choice, and hints of the ultimate glory to come.

I know differences are inevitable, but if they capture the wonder of the story, I’ll be satisfied.

What do you think is essential to the story? Are there scenes and story elements that you hope the film captures?

Do You Have A Favorite Narnia Book?

The Problem of Subjectivity