The Laidly Worm and Other Loathly Ladies of Lore 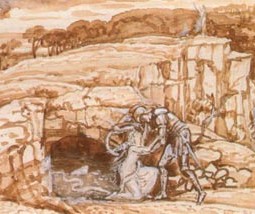 Most people have at least passing familiarity with Beauty and the Beast, a tale that has inspired many a speculative novel, but not with the similar stories that involve a cursed woman, such as The Laidly (or Laidley) Worm.

This lesser-known folktale has a number of variants, all of which revolve around a young woman turned into a horrible serpent or dragon. This misfortune befalls her through no fault of her own, rather from the malicious deeds of an evildoer (frequently her stepmother) who sees her as a rival and places her under a curse. She suffers, bound in this grotesque form, until she’s transformed back into her natural state by three kisses from her brother, who receives instruction that the only way to regain his sister is plant three kisses on the scaly cheek of the dragon–quite the task for a renowned dragon hunter.

Though this particular tale doesn’t portray the romantic love of Beauty and the Beast, it still depicts the ability of love to free and transform the most hideous of beasts, and it’s intriguing because it explores a woman transformed, rather than a man.

The Laidly Worm falls into the greater tradition of the “loathly lady” stories–a woman trapped in some repulsive form (often an old hag or a loathsome creature like a dragon) who may only be freed by a kiss (or alternately, when a man agrees to marry her despite her appearance). At that point, she’s released from the bonds of her false form and transformed back into her original, lovely state. Many similar stories can also be found in the Aarne-Thompson category 402, the Animal Bride.

Though these stories abound in the folklore of many regions, for some reason, tales of the monstrous man have permeated our current culture far more than that of the loathly lady. Why do you think that’s the case?

The Relationship of Beauty and Truth

The Beauty of Speculation