The Fusion of Speculative Art and Literature 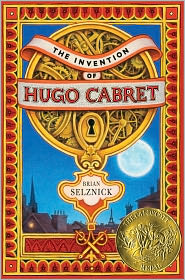 Recently, my library featured a small display of steampunk novels. On the shelf along with Jules Verne and other classic writers sat a rather thick hardback titled The Invention of Hugo Cabret, a story about an orphan boy living hidden in a train station. Though he keeps all the station clocks in repair, he must turn to thievery for food and basic necessities as well as for the parts needed to repair a mysterious automaton discovered by his now-deceased father. The automaton has come to mean everything to him, as it represents his last link to his father, so he draws on all his training in clock work mechanics, determined to restore it to working order.

Though I knew nothing about the book or author on first sight, I was intrigued when I skimmed the pages, because the book blended drawings and text in an unusual way. Though a YA novel, it relied on illustrations to tell much of the tale (thus the 500+ pages), and the story text alternated with page after page of pictures, each image advancing the plot.

Although the concept of telling a story through a blend of pictures and words was intriguing, in this case, the heavy reliance on illustrations distanced me from the characters to the point I only read a small part of the book. In picture books for children, this means of storytelling works, but when trying to tell a story larger in scope, this method has several distinct weaknesses–pacing and characterization foremost. Yet despite my mixed feelings about the book, it won a Caldecott Medal and a film version will soon release. So clearly, it worked for some people.

Perhaps as a writer, I’m too fond of words to enjoy a story carried along by other means. I’m sure it could be handled in a way that enhances the vividness of the world without sacrificing character depth and intimacy, yet I’m fond of envisioning an unfolding tale in my own imagination.

What about you? Would you read a book that fused art and literature in such a fashion? Or if you’ve already read Hugo Cabret or a similar book, what did you think of the experience?

Death and Resurrection: Patterns in Folklore and Fantasy

Are Fairy Stories Only for the Young?