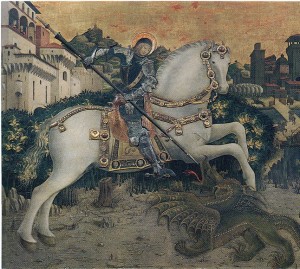 Yet I’ve noticed a shift in the perspectives of readers and writers on this subject, a trend toward celebrating the shades of grey to such a point that notions of good and evil vanish. Such books may vaguely acknowledge some good and some evil in the world, but blur the lines between them past recognition. Protagonists and antagonists have little to differentiate between their behavior, neither one operating in a particularly ethical manner, and behavior dictated by “every man [doing] that which was right in his own eyes.”

As Christian writers, we should approach this conflict differently than those holding to other worldviews. We know good and evil exist. While recognizing that all people are flawed, we also know there is a right and wrong way of living, and a choice each individual makes to align with good or evil. Does this mean we need tales with squeaky clean heroes and dastardly villains? Of course not.

I don’t mind waiting for a revelation of where the battle lines fall, seeing heroes stumble and sin, finding the good in a villain, or sorting through characters who seem ambiguous and whose motives may be good or evil or simply self-serving. After all, in life, we confront this. We know good and evil exist, but there are also areas that don’t seem clear…and we don’t always properly discern between them. As we’re conformed more in the image of Christ, we come to view things more rightly, as he sees them–but it’s a process of growth for us and for the characters we create.

So our stories don’t have to follow any one pattern, yet we need to be mindful that if we blur the lines between good and evil too far, in a way that suggests there is no moral code or standard, our fiction hardly aligns with Biblical truth.