Tale as Old as Time: The Art and Making of Beauty and the Beast 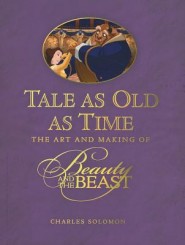 If you’re interested in fairy tales, you’ll likely want to read Tale as Old as Time, a non-fiction exploration of the creative process that transformed the familiar story of Beauty and the Beast to the Disney film that many of us enjoy.

In eleven chapters, the book captures the progression of bringing a fairy tale to the screen, and the way that the concepts of the writers, artists, and producers changed over time to bring us the film in its final version. The writing style makes for easy reading, and abundant images taken from various stages of the illustration process provide a visual demonstration of the development of the film.

The book explores what started Disney down the path of adapting Beauty and the Beast, and I was surprised to learn how little their initial thoughts resembled the final version of the film. The earliest and most simplistic version had the prince terrorizing small animals in the forests of his kingdom, after which he was turned into a beast himself, so that he might be taught a lesson. A number of other renditions followed this, bouncing between 15th century and 18th century France, changing the plot in various ways, and adding or subtracting a number of cast members. One early version portrayed Belle with two older sisters and three suitors, while another concept gave her a younger sister, a pet cat, and an overbearing aunt who was behind much of the villainy in the film, including the attack on the Beast’s castle at the end.

The primary characters themselves also underwent some significant changes, especially the Beast and Gaston. Initially, Gaston was portrayed as an aristocratic fop, a silly and almost effeminate individual, then as a muscular but rather unattractive lout, and finally as the handsome and proud hunter. His ultimate depiction as outwardly attractive and inwardly ugly was meant to serve as a foil to the Beast, a hideous creature on the outside, but a man of good character on the inside.

It took some time for the artists to settle on the depiction of the Beast, and at points he strongly resembled an ape or a wild boar, before the final design which captured “the beard of the buffalo, as well as the massive head, the mane of a lion, a bearlike body, a gorilla’s brow–the strength of that brow with the eyes hidden beneath it–the tusks of a boar and the tail and hind legs of a wolf” to create the familiar form of the Beast. Considerable time went into fleshing out each character, and one note on the development of the Beast even framed his struggles for self-control in terms of the Scripture that states “That which I would do I don’t do and that which I would not do is the very thing I do.”

Both the Beast and Belle have transformative journeys, and in the final version of the film, Belle became a unique Disney heroine with a distinct pattern of growth that allows her to see the beauty in the Beast. Yet her role also underwent some changes as ideas were tossed around. While her appearance didn’t evolve as drastically as some of the other characters, she went from a tomboy and practical trickster to a bookish, dreamy girl, one protective of her father and strong in character–an excellent compliment to the Beast.

Since all emotion must be portrayed on screen, the artists invested a great deal of time and energy toward capturing the transformation of the characters in their drawings. They added nuances meant to convey meaning, with “every element, right down to the color of a costume” intended to “[tell] the audience something about that character and situation.” These little details became a vital part of conveying emotional progression of the story, and their commitment to excellence–even on a tight budget and a strict timeline–paid off as the film won awards and critical acclaim.

Overall, Tale as Old as Time is a fascinating look at the evolution of a fairy tale as well as the creative process of animated film making. Like books, films must create compelling stories, so writers of novels will find much to identify with in the descriptions of the development of the film and the dedicated efforts of all involved to bring new life to a classic fairy tale.