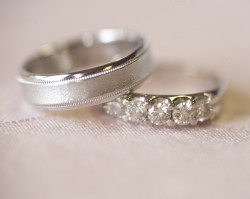 On Saturday, my brother made a lovely woman his wife. Watching the expression on his face as his bride walked down the aisle will forever remain etched on my memory. Their own personal additions mingled with long-standing traditions to create a beautiful ceremony that spoke of their love and commitment to each other and to God.

As I witnessed their vows, I considered the depth of meaning given their covenant by the incorporation of elements that have marked weddings for hundreds of years. The traditions surrounding the covenant of marriage have both a rich history and depth of symbolism, some lasting past memory of their origin.

Wedding bands, for example, came into use in ancient Egypt, and their location on the third finger is often ascribed to the Egyptian belief that the “vein of love” ran from the third finger of the left hand to the heart, a belief passed on to the Greeks and Romans. Another ceremony staple, the kiss after the couple becomes husband and wife, at one time served as a legal act of commitment. It’s still a sign of love and covenant, a seal of sorts on the marriage, but it no longer has any legal effect. In the case of my brother and his bride, it was much anticipated, since they saved their first kiss for the wedding ceremony!

Regardless of where the traditions originate, they speak to the culture in which they were developed. So how does this relate to fantasy worlds? When they are well-developed, the customs surrounding the rites of life–weddings, funerals, child-birth, coming-of-age, and other milestones–can bring a story-world to life. These elements reveal a great deal about the culture and lifestyle of a given fantasy world.

As a reader, I feel immersed in a distinct setting when the social and cultural aspects of a fantasy world have their own distinct patterns and traditions, rather than just offering a different physical backdrop. In Dandelion Fire, author ND Wilson developed the concept of a important tradition surrounding the naming ceremony of a child. He drew from real-world elements, but this “christening” held particular significance to the story and his world. It resonated all the more because he tied it in with spiritual realities, painting a vivid naming scene that referenced Psalm 23. Other authors have developed cultural customs of their own that bring life to the world their characters inhabit.

I enjoy inventing such elements and adding them to my books. What about you? Have you read books that were strong in this aspect of world-building? What about books you have written/are writing?

On the Lack of Timeless Stories