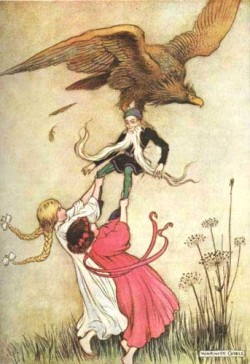 One of the most evident themes is the value of familial love, which runs from beginning to end of the story. As the tale opens, we see that the sisters and mother alike share a strong bond of affection. Despite the death of the father/husband, they enjoy an idealized family life.

And though the sisters have distinctive traits and preferences, they’re united in love for one another. According to the tale, “The two children loved each other so dearly that they always walked about hand in hand whenever they went out together, and when Snow-white said, ‘We will never desert each other,’ Rose-red answered: ‘No, not as long as we live’; and the mother added: ‘Whatever one gets she shall share with the other.'”

As the tale winds to its conclusion, we see the truth of this statement. The sisters share equally in good fortune, with Snow White marrying the prince and Rose Red wedding his brother, and the great treasure divided between them. In this fashion, they share a home together and extend an invitation to their mother to join them. Together, they live in great contentment, preserving their close family ties.

Although this portrayal glamorizes family life–suggesting that no conflict or disharmony will ever disturb the peaceful bonds of love–it’s meant to convey the beauty of close family relationships. It appears intentionally crafted to impress on children the importance of family and the rewards of good, loving behavior.

The importance of upright deeds and purity of heart are conveyed from the beginning, when the story establishes Snow White and Rose Red as “the sweetest and best children in the world, always diligent and always cheerful.” They’re content, even in impoverished circumstances, kind to one another, and compassionate toward those in need. As the story unfolds, we learn that even if Snow White and Rose Red tarry late in the woods (traditionally a dangerous place), no evil ever befalls them because an angel watches over them. Not only does an angel protect them, a lamb and a white dove, symbols often used for God rest beside their hearth–giving the impression that God blesses their household.

Furthermore, they offer hospitality to a stranger (the bear), saying “you can lie there on the hearth, in heaven’s name; it will be a shelter to you in the cold and wet.” They extend similar kindness to the dwarf, although he treats them harshly. And in the end, their compassion demonstrated toward the bear and the dwarf alike lead to marriage and wealth for both girls, a happily ever after that follows wise moral decisions.

This depiction of reward for good character  exemplifies another story theme–the good always receive a blessing and the wicked their just punishment (as demonstrated in the downfall of the dwarf). Although it’s greatly simplified, this reflects an element of Biblical truth, as do many other aspects of the story–such as the value of extending hospitality and the importance of aiding those in need.

In general, the themes of Snow White and Rose Red were intended to convey moral values to children. Perhaps because of that the messages often come across as heavy-handed and sometimes unrealistic, yet the positive portrayals of family and virtue can still be appreciated.

There’s more here than I can explore in a single post, so I welcome any observations and thoughts on the story and its themes!