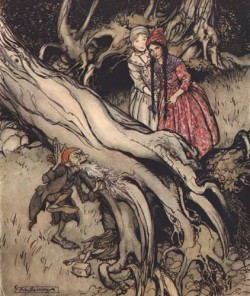 In the past, I’ve done in-depth explorations of Beauty and the Beast and Rapunzel, and many of you expressed interest in similar series examining other fairy tales. So I’m pleased to highlight Snow White and Rose Red, a story that belongs to the small segment of fairy tales with no known oral origin.

Though it wasn’t passed down by storytellers through the centuries, Snow White and Rose Red has still become an important part of fairy tale tradition, and its distinctive storyline earned it an Aarne-Thompson category of its own: The Two Girls, The Bear, and the Dwarf. This in turn falls into the broader classification of supernatural or enchanted relatives, which includes such stories as Beauty and the Beast and East O’The Sun, West O’The Moon.

Though certain elements, such as the animal bridegroom, occur in many other fairy tales, it wasn’t until the writing of The Ungrateful Dwarf by Caroline Stahl that the tale began resemble the one we know today. The Ungrateful Dwarf, published in a story collection entitled Fables, Tales, and Stories for Children (originally written in German), was meant to convey the importance of good morals. This intention perhaps explains why Snow White and Rose Red is more of a family-friendly story–even in its original form–than many other fairy tales.

In Stahl’s version, two impoverished sisters encounter a dwarf and help him out of numerous difficulties, despite his poor treatment of them. The romantic element later introduced by the Grimms has no place in this story and the bear doesn’t appear until the end, when he intervenes and kills the dwarf. After the death of the dwarf, the girls take his treasure and go on to live a wealthy life.

The sisters, the ungrateful dwarf, and the bear all appear in the Grimm version, but the storyline differs significantly. In fact, scholars consider Snow White and Rose Red an invention of the Grimms that draws on The Ungrateful Dwarf for some inspiration. Not only did the Grimms write the story themselves rather than mining it from oral tradition, but since they incorporated distinctive literary elements, it’s also considered their only Kunstmärchen or artistic folktale.

In an 1837 collection of Grimms’ fairy tales, we first see Snow White and Rose Red appear in its entirety. Unlike many fairy tales, this one depicts strong familial devotion alongside romantic love. The Grimms tell of two sisters who share a close bond with each other and with their widowed mother. Some believe that the close friendship of the sisters in Snow White and Rose Red mirrors the strong relationship shared by the Grimm brothers.

Regardless, they’re innocent and loving girls, happy in their simple life and willing to help anyone in need. Their kindness leads them to offer shelter to a bear who knocks on their door in the middle of winter, and he becomes a trusted family friend. In the spring, to their sorrow, he departs and they don’t see him again for many weeks.

In the meantime, Snow White and Rose Red repeatedly encounter an unkind and deceptive dwarf, whom they free from a number of traps. In the end, they come across this dwarf with his treasure, and he turns on them in a rage. At that moment, a bear shows up–their bear–and kills the dwarf.

As it turns out, the bear was a prince cursed by the dwarf into animal form. The only thing that would free him was the dwarf’s own death, which would also restore to him his stolen treasure. After all is revealed, Snow White marries the prince, and Rose Red his brother.

Though this seems like a relatively straightforward love story, the Grimms incorporated a number of literary symbols and Christian elements, which I’ll explore in upcoming posts. Look for the second post next Friday!

How familiar are you with the Snow White and Rose Red tale? Is there anything in particular you’d like to see discussed?

Night of the Living Dead Christian, Day 3: A Review