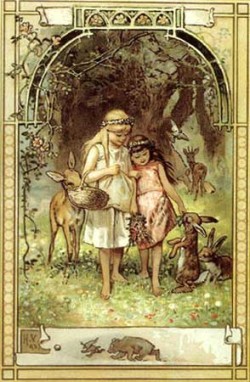 In three of the novel versions of Snow White and Rose Red, the core elements of the story–the bear, the sisters, and the mother–remain, but the incidentals, tone, and emphasis vary greatly.

Shadow of the Bear sets the familiar story in modern-day New York, and its Catholic perspective is quite in keeping with the Christian elements and tone of the original tale. Yet by modernizing it, it takes away a some of the fairy tale feel.

Others have kept the fairy element, but taken the story in darker directions, placing the sisters in more perilous places than the safe forest of the Grimm tale. Snow White and Rose Red by Patricia Wrede puts the sisters in a version of medieval England that intersects with the realm of Faerie, and focuses more strongly on magic than the Grimm version of Snow White and Rose Red.

And Margo Lanagan penned an extremely dark retelling, Tender Morsels, in which the sisters are products of rape and the safe place their mother has attempted to create for them begins to fall to pieces. Please note that I have not read the Wrede and Lanagan stories, so their inclusion is not an endorsement, but rather a look at how the story has evolved.

When we step back from adult retellings of the story to look at the numerous picture book versions, we see a turn back to the more gentle, lighthearted origins of the tale. Lovely illustrations do much to bring the story to life and back into the realm of its originally intended audience–young children. The lone film I’m aware of, which was produced by German filmmakers  in 1955, follows in a similar child-friendly vein.

Although these various modern renditions cover some ground, many aspects of the story could use more attention. The family dynamics, Christian elements, and transformation of beast to man could offer rich material for storytellers, if they explored it. And I hope they will in future years.

Any thoughts on why Snow White and Rose Red has fewer retellings than fairy tales like Cinderella or Beauty and the Beast?