One of the aspects of Venom and Song I found interesting was the use of spiders as villains. There’s something inherently creepy about spiders. After all, if the enemy rode on war beetles or had ant spies, that wouldn’t be nearly as frightening. But giant nasty warspiders or small poisonous spy spiders…shudder.

Batson and Hopper aren’t the first to give spiders roles as villains in fantasy literature, though they put their own unique twist on it. In The Hobbit, Bilbo faces the spiders of Mirkwood, who capture and bind his companions, hanging them up in their larder to be consumed at convenience. While I’d never want to encounter the spiders of Mirkwood, Shelob in the Lord of the Rings makes a far more intimidating villain—an ancient spider-creature, a cunning beast of the dark, fully evil and bent on harming Frodo and Sam.

So where else do spiders appear? I did a little digging and found spider tales in most world mythologies. Frequently, they’re evil or fearsome creatures. In African mythology, a trickster god known as Anansi appeared as a spider. In an early Chinese fantasy novel, spiders try to ensnare and kill the protagonist. In a short story, The Valley of Spiders, British author HG Wells writes of three men battling and fleeing from an unexpected army of great spiders…and revealing something of themselves in the process. Sometimes spiders do take on a positive role, especially in children’s stories like Charlotte’s Web, but overall they seem to lend themselves to the creepy, mysterious, or villainous. 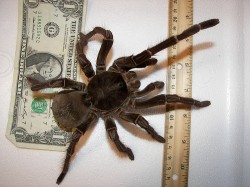 And as a bonus to help you imagine the spiders faced in Venom and Song, a picture of the largest spider in our world—the Goliath Birdeater, which can eat mice (not birds, strangely enough) and may reach up to a foot in diameter. Look at that picture and imagine it growing larger…many times larger…big enough to ride like a steed. And then you might get an idea of just how creepy the villains are in Venom and Song.

So why do spiders frequently evoke fear and disgust?  You tell me. And come back Wednesday for a discussion of several of the novel’s themes.

Visit others on the tour for more discussion of Venom and Song: