Following a brutal attack that nearly obliterated their people, the elves of Berinfell fled underground, where they’ve lived hundreds of years in hiding, waiting and hoping for the day they could make their stand against their enemy and return to their home land. Instrumental in any hope of regaining their freedom are seven young elf lords, long hidden on Earth, unaware of their royal identities. Venom and Song opens shortly after the arrival 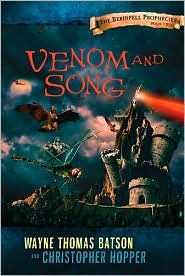 of the elf lords to the world of Allyra, where they must fight to defend their people from the attacks of the Spider King and his Gwar army. They must acquire the skills and courage necessary to face a relentless foe, learn to operate as a team, and understand the ways of Ellos if they have any hope of victory.

The first scene opens with the lords in peril, a sign of things to come. Danger stalks them throughout the book and pulls a line of tension from beginning to end of this fast-paced adventure story. The plot twists and turns as it unfolds, making Venom and Song a journey of the unexpected.

Despite the pace, the authors weave in quality spiritual content on the value of sacrificial love, endurance and victory, and the pleasure of Ellos in his people. The journey that these teens undergo in finding their identity will be meaningful to those in any place of life but especially significant to pre-teens and young teens experiencing the same struggles in our own world.

The world of Allyra itself fleshes out the events and themes of the story. In addition to some “standard” fantasy races (elves, gnomes, etc), the authors have created their own unique creatures and cultures, such as the assassin race of drefids, armed with deadly claws. They also sprinkle throughout the story unusual plants, animals, and places that help bring the world to life.

Despite these strengths, there were some stumbling points for me. The sheer number of protagonists made it difficult to identify with any of them or care about their fate for much of the book, especially when combined with rapid jumps from one mind to another that occasionally left me bewildered regarding whose thoughts I shared. I admit, part of this is personal preference for a close third or first person POV and the intimacy with character these perspectives bring, though I enjoy omniscient also if done in a smooth, harmonious fashion.

But perhaps my biggest issue was in some logical errors that cropped up. For example, in one scene during the middle of the elf lords’ training, they have a mission with a specific set of parameters. If they fail to adhere to them, the exercise will be deemed a failure. Jimmy’s instructions are to “only use the words yes and no.” Yet later during the exercise Jimmy shouts “Quick! What’s next?” and “Come on!” or warns the others “Something’s coming” and so forth. Yet his failure to follow orders doesn’t disqualify their success, as they were told it would. Other similar issues plague this scene throughout. And earlier in the book, the characters flee down a cable in a certain order, but somehow the order switches as they careen down the line, and two characters which previously had several others between them collide with each other. Each time an incident like this occurred, it jarred me out of the story, forcing me to read and reread several times, thinking I must have missed something. Yes, mistakes can happen. But unfortunately, these were distracting ones.

To be honest, I hate saying anything negative about a book, so I struggled to include some of the aspects that detracted from the story. I know the incredible amount of work that goes into writing a novel, and I respect Wayne Thomas Batson and Christopher Hopper for their endeavors in crafting this story. But to give a truthful review, I must admit that I didn’t enjoy Venom and Song, due in part to the weaknesses mentioned above. However, that said, I’ve heard quite a bit of positive feedback around the internet, especially from the target audience (middle grade readers). And if a book resonates with its intended audience, then it has succeeded. So while I wouldn’t personally recommend Venom and Song for adult readers, for pre-teens and early teens it may be worth checking out.

Stop back tomorrow for a discussion of spider villains!

For more about the authors, visit their blogs:

For more commentary on Venom and Song, stop by the other tour participants’ blogs: