Roverandom by JRR Tolkien, A Review 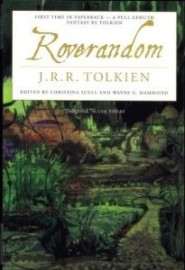 Unlike Lord of the Rings, Roverandom has remained largely hidden from the public eye, but it’s worth a closer look. Tolkien wrote this novella for his son, after the loss of his son’s favorite toy dog and intended as a means of consolation and entertainment. As with many of his works, Roverandom didn’t come into publication until well after Tolkien’s death, an incredible seventy-three years after he first penned the tale. Though somewhat geared toward a child audience (as Tolkien wrote it for his children), Roverandom offers classic Tolkien creativity combined with a touch of humor.

The story follows the adventures of the hapless dog Rover, who is turned into a miniature toy after his rude treatment of the cantankerous wizard Artaxerxes. Despite his transformation, Rover still retains some ability to move and turns all his willpower toward an endeavor to escape his fate as a toy and return home. Artaxerxes sends Rover to a toy shop, where a mother purchases him for her little boy. Though the little boy loves his toy, Rover only cares about gaining his freedom. One day on the seashore, he wiggles out of the pocket of his boy, and then his adventures really begin.

A sand wizard named Psamathos takes pity on Rover and transforms him back into a real dog–but still pocket-sized, thanks to the governing rules of wizard etiquette. In his quest to find his old home and proper size, Rover travels far and wide–to the light side of the moon, where he receives the name Roverandom, to the dark side of the moon, where dangers lurk, to the bottom of the deep blue sea, where he befriends a mer-dog, and at last back to a garden he visited in the realm of dreams. But all his travels will avail him nothing if he cannot convince Artaxerxes to remove the spell that keeps him small.

There is a decided element of humor weaving through the story, as seen in passages like this one, in which the narrator explains: “Of course, you can imagine all kinds of things go wrong in the sea, that not even the best PAM [Pacific and Atlantic Magician] in the ocean could prevent, and some of which he us not even supposed to have anything to do with. Wrecks come down plump now and again on the roof of somebody’s sea-house; explosions occur in the sea bed (O yes! They have volcanoes and all that kind of nuisance quite as badly as we have) and blow up somebody’s prize flock of goldfish or prize bed of anemones, or one and only pearl oyster, or famous rock and coral garden; or savage fish have a fight in the highway and knock mer-children over; or absentminded sharks swim in at the dining room window and spoil the dinner; or the deep, dark, unmentionable monsters of the black abyss and do horrible and wicked things. The mer-folk have always put up with all this, but not without complaining. They liked complaining. They used to write letters to The Weekly Weed, The Mer-mail, and Ocean Notions…” As evidenced by this quote, Tolkien also referenced the workings of the adult world quite often in a rather satirical manner.

Though his settings in this tale are fanciful and touched with whimsy, dangers lurk on the outskirts of the story–sea-serpents, shadow bats, spiders that want to pickle little dogs, which give this light-hearted tale an edge of peril.

If you haven’t had the opportunity to read Roverandom, it’s the perfect story for a bit of whimsical spring-time adventuring.

Short Stories from Other Worlds

Novel Openings: Are You Hooked?