You venture onto the streets of 19th century New York, where your carriage awaits. With care, you lift the hem of your skirt and step up into the conveyance. Once positioned, you give a nod to your driver. Rather than flick the reins of a horse, he adjusts complex equipment, and your carriage lurches forward, pulled by a massive steam fueled automaton in the form of a dignified gentleman.

Such a scenario might fit well the pages of a steampunk novel, but the steam man actually existed, one of many examples of real-world steampunk inventions. As fiction, steampunk fuses 19th century culture (often the Victorian era), with advanced technology powered by steam rather than modern-day sources of fuel, using elements of the past as a base to create a speculative future. Jules Verne, HG Wells, and other Victorian writers of speculative fiction penned the precursors to this genre, and many today follow in their footsteps.

In the Victorian era, steam men actually had a place in our culture, but they remained novelties, never catching on with the general public as their inventors hoped. In 1868, Zadoc P. Dederick created and patented the first successful steam man. He conceived the idea at the age of sixteen, but it took him six years to bring a viable model to completion. His steam man, a rather bulky affair, attached directly to a carriage and was touted as a better alternative to horse-pulled conveyances, since it could travel at almost any rate of speed without tiri 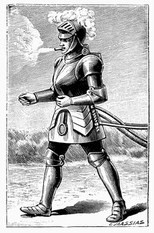 ng and pull a load equivalent to that of three draft horses. The 7’9” giant had a face “molded into a cheerful countenance of white enamel, which contrasts well with the dark hair and mustache,” according to a period newspaper, and a body crafted to appear as human-like as possible, so it wouldn’t frighten the horses when it joined them on the streets.

The cost of construction–somewhere in the range of $25,000-30,000 in today’s currency–certainly prohibited mass production, though Dederick claimed he could get the cost down to a fraction of the initial price for successive steam man. Apparently, he never got the chance.

Following in Dederick’s footsteps, George Moore created a new steam man in 1893, rather less practical and powerful than its precursor. This creation stirred media sensation, though it only had a 1/2 horsepower engine and needed a stabilizing horizontal bar in order to walk. Others dabbled with steam men during this era, and though they never made much headway into popular culture, steam men paved the way for future automatons and robotics of various forms. 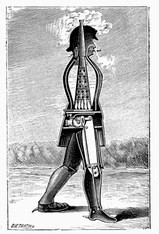 What do you think of the steampunk genre? Do you read it? Write it?

Personally I enjoy Jules Verne’s stories, but I haven’t read many modern-day steampunk writers. I’m open for suggestions, though. Do you have any recommended authors in this genre (you’re welcome to share a little about your own work as well)?

Three Essays For the Creative Mind

A Sneak Peek into The Hobbit Movie