Prophet by RJ Larson: A Review 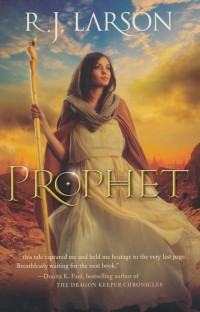 Ela Roeh of Parne doesn’t understand why her beloved Creator, the Infinite, wants her to become His prophet. She’s undignified, bad tempered, and only seventeen–not to mention that no prophet of Parne has ever been a girl. Worst of all, as the elders often warn, if she agrees to become the Infinite’s prophet, Ela knows she will die young.

Istgard has turned their back on me. See the evil they do.

Yet after experiencing His presence, she can’t imagine living without Him. Determined to follow the Infinite’s voice, Ela accepts the sacred vinewood branch and is sent to bring the Infinite’s word to a nation torn apart by war. Here she meets Kien, a young Traceland ambassador determined to bring his own justice for his oppressed people. As they form an unlikely partnership, Ela must surrender to her destiny…and determine how to balance the leading of her heart with the leading of the Infinite.

Will you accept the branch and speak my will? Will you be my prophet?

Prophet offers something unique in the world of Christian fantasy with its Biblical history overtones and its speculation on life as an Old Testament type prophet. It reframes Old Testament prophesy in a new way which allows greater consideration of the human struggles these prophets faced and the cost they paid to proclaim the word of God.

Although Prophet takes inspiration from the Old Testament, Larson has created her own world, one standing on the brink of war. The Istgardian massacre of a peaceful Traceland town gives Ela, newly chosen prophet of the Infinite, her first mission–to confront the evil rampant in Istgard.

Needless to say, her message condemning the people of Istgard earns her many enemies, but the Infinite protects her as she speaks His word.

And the Infinite gives her two companions to walk with her through the dangers she faces–her endearing younger sister Tzana and the Traceland ambassador Kien. Each has a role to play in the unfolding drama that began when Ela embraced the call of the Infinite.

Though it is said that no prophet dies silver-haired, Ela accepts the risks and responsibilities, because of her love for the Infinite. Yet she still struggles with her flaws, a quick temper not least among them. Sometimes she seems blind to the obvious, so caught up in her own assumptions about what the Infinite speaks, that she can’t consider any alternative meaning or outcome. She’s fixed on the idea of her coming death, but it’s difficult for the reader to feel the danger, knowing that the Infinite still has a purpose for her.

Despite my moments of annoyance with Ela, her flaws emphasize the reality that God uses the weak to bring down the strong. It’s not our perfection, but our willingness to follow His command. Since this story deals with the life of a prophet, the spiritual elements are intrinsic to the plot and the strong messages don’t feel like a sermon, but rather an exploration of relationship with God. Prophet highlights the truth that following God comes with true cost, but it’s worth any price we might pay.

Its YA tone will likely make Prophet most engaging to teen readers, but all ages will be able to relate to the spiritual themes. As a historical fantasy, this has the potential to engage a wider range of readers, especially those with an interest in Biblical history. And if you’re looking for something unique in the Christian fantasy market, you may want to give this a try.