On the Mixing of Mythologies 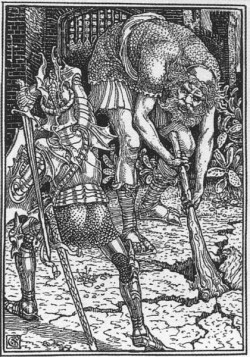 Only in fairy tales can a heart live outside the body for years without end, and indeed the detached heart occurs in a number of fairy tales such as the The Giant Who Had No Heart In His Body (which falls into Aarne-Thompson type 302). In these tales, the giant/ogre/supernatural evil creature removes his heart and hides it in some remote spot, far out of harm’s way. In this way, he becomes immortal, unable to die unless someone should discover the well-concealed and well-protected place he has hidden his heart. The hero of the tale must go through a series of rigorous adventures to successfully locate the heart of the evil creature and destroy it.

A fantasy novel I recently read picked up this motif and used it as a significant part of the adventure experienced by the hero and heroine. In order to gain victory, they had to find the heart of the villain, which he hid outside his body to gain immortality. Only slaying the heart would allow them to kill the evildoer–just like in the old fairy stories–but the author included a twist which made the old concept his own.

However, he took this borrowing of mythologies a step farther. Rather than draw from a single source–in this case the detached heart fairy tales–the writer incorporated aspects of different folklore traditions as it suited the story he wanted to tell. Many other fantasy authors take this approach, combining various elements from older mythologies and fairy tales with their own invented material. Sometimes this works well, other times it detracts from the story. For example, I love Narnia, but Tolkien objected to it on the grounds that Lewis blended in mythic creatures and lore from a number of different backgrounds. He took centaurs, fauns, and the like from Greek and Roman mythology, but just as readily pulled in dwarves from Norse lore.

Perhaps because I’m not the scholar Tolkien was, a blending of mythologies doesn’t bother me–provided the author takes time to weave it in well to his or her own storyworld. Yet to fuse disparate elements well requires knowledge of the traditions you’re borrowing from, not just the desire to grab for some convenient bit of lore. The integration must feel true to the invented world, even if recognizable as emerging from an older piece of myth or lore.

I’m curious about your perspective on the subject. How do you feel as a reader when you find familiar folklore elements from a variety of sources in a single story?

And if you’re a writer as well, do you find yourself drawing on any specific mythologies or incorporating specific folklore themes or motifs from fairy tales/legends? If so, how carefully do you stick with tradition versus taking old elements in new directions?

Monster in the Hollows, Day 1: A Review