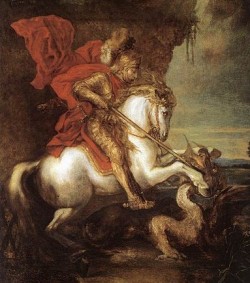 In light of recent discussions I’ve witnessed on the impact of fiction, I’d like to share a little something from GK Chesterton on fairy story:

Exactly what the fairy tale does is this: it accustoms him for a series of clear pictures to the idea that these limitless terrors had a limit, that these shapeless enemies have enemies in the knights of God, that there is something in the universe more mystical than darkness and stronger than strong fear.”

When GK Chesterton speaks of fairy tales, he often seems to use a broader scope than what we commonly think of as fairy tales today (though he clearly referenced those), speaking of tales of epic deeds, the fantastic, those that concerned themselves with the extraordinary. I think this quote can be extended to apply to fantasy as a genre, and the unique opportunities it offers to show “there is something in the universe more mystical than darkness and stronger than strong fear.”

While painting a picture of the dark and direful things that sometimes happen, we’re still revealing the light above all, conveying something of the ultimate truth even in the simplest of fairy stories. Beyond the fear, there is faith. That’s why these stories endure.