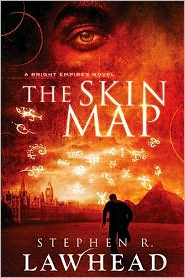 What sort of story is The Skin Map? I’d peg it as an adventure tale with elements of the fantastic. It takes the classic scenario of an ordinary man discovering he’s actually something special and makes it bigger, so it encompasses the fate of not just our world, but many worlds.

The novel opens with an introduction to Kit Livingstone, a man with an normal, predictable life, mundane in the extreme. But everything changes for him the day his great-grandfather appears, seemingly out of nowhere, to take him on the adventure of a lifetime…an adventure he doesn’t really want. Despite Kit’s initial resistance, his great-grandfather Cosimo has pinned all his hope for furthering his life-long work with the ley lines on him. These expectations weigh on Kit as he struggles to adapt to his new reality, and soon the full precariousness of their situation and the dangers of their abilities are revealed. When confronted with unfathomable truths, Kit must choose whether to ignore them and remain safe or acknowledge them and go on a journey into the wilds of the unknown.

Interwoven with Kit’s adventures, we experience the exploits of the original owner of the Skin Map, getting just a few hints of his story, and those of Kit’s girlfriend Wilhemenia, whose undertakings may change the course of history.

In the beginning, Kit and Wilhemina aren’t particularly likable characters, but as they undergo the trials of their adventure, they slowly become more admirable. I would have liked deeper intimacy with the characters and a greater sense of their emotions as they struggle with unfamiliar experiences, but the focus on this tale is on the concept and the adventure, and overall it works.

In many ways, this book felt like a prelude for things to come in the books that will surely follow. We’re getting oriented to the concepts and regulations that govern ley line travel, to the villains and heroes of the piece–and those who are stuck in between–but we we’re not fully shown what motivates the villains, what the true aim of the heroes is, or the full scope of what’s at stake. We only get hints at what’s to come as the opening volleys of what promises to be an inter-world battle begin. That said, The Skin Map still serves as a ripping adventure in its own right, with plenty of tension, black moments, and costly sacrifices.

Several aspects did distract from my enjoyment of the story, such as some of the writing stylistic devices which I wasn’t overly keen on. And several acts that I would have expected to raise eyebrows in society hundreds of years ago passed by without so much as a questioning glance. In addition, some circumstances of the story seemed overly coincidental, but are explained as acts of Providence.

By the same token, several different aspects enriched the story for me–period dialogue, chapter titles that furthered the sense of time and setting, a discussion of the importance of names, and Cosimo’s rant about Kit’s education, which reminded me a little of the Professor in Narnia and his complaint, “I wonder what they do teach them at these schools?”

As I mentioned previously, overall this story worked for me, providing intrigue and suspense with an ample helping of the speculative alongside. But if you’d like to see other perspectives, visit the blog tour posts below:

Disclaimer: In conjunction with the CSFF Blog Tour, I received a free copy of this book from the publisher.