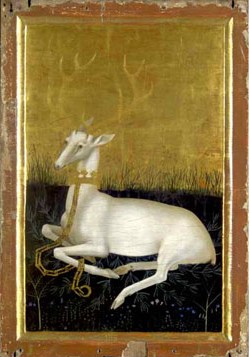 Some creatures clearly belong to the land of myth (centaur, phoenix), while others straddle the border, taking more direct inspiration from creatures that roam the earth but with epic qualities and appearance (think kraken). The white stag belongs to another group altogether, a real creature in its own right, but with mythic abilities attached to it. You might see one of these in our world, but I doubt you’ll experience what legends say…

Appearance: The white stag appears as its name would suggest–a deer with all-white fur and often a towering rack of horns. But legend assigns it intriguing characteristics beyond its white coat. In folklore, sometimes the white stag has red ears or bears the sun or another symbol (some say the cross) between its horns. Other tales suggest its horns flame with fire that never consumes them, while in Persian legend, a creature like the white stag, actually had blue fur, eyes like rubies, and hooves like gold.

Unique qualities and traits: By all accounts a noble creature, the white stag possessed the ability to continually elude its hunters, who chased it not for the kill, but the thrill of pursuit. Often the stag led those who took up the chase on a quest, or by its mere appearance, signaled that the time for a quest was at hand. Many tales suggest its presence heralded coming change. At times, the stag was depicted as having almost human-like understanding and certainly far beyond animal intelligence.

As a symbol, some legends held the white stag signaled the presence of the Otherworld or marked an act of transgression. Some have also viewed it as a symbol of Christ or of 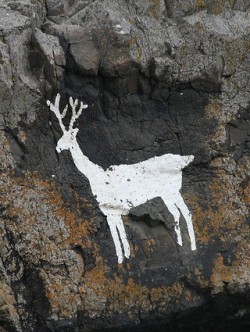 Sources from myth and legend: White stag legends emerged in early Indo-European society, and variants found their way throughout European and Asian cultures. In Hungarian folklore, the tale of Hunor and Magor credits the white stag with leading these two sons of Nimrod to the bountiful land in which they settled, eventually giving birth to two people groups–the Huns and the Magyars. This theme of the stag leading its pursuers to a significant location, usually favorable, is common and appears in Persian, Japanese and Celtic mythologies, to name a few. By and large, the stag is depicted throughout folklore in a positive light, but in Finnish legend the stag actually served the queen of the Underworld and led its hunters to their doom. 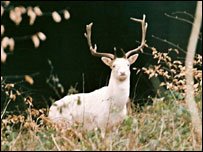 In more recent literature, the white stage has made many appearances. In The Lion, the Witch, and the Wardrobe, the white stag shows up at the end, after Peter, Susan, Edmund, and Lucy have reigned many years in Narnia. True to form, it acts as a catalyst for change, and in the pursuit, the kings and queens encounter the long-forgotten lamppost, and find themselves returned to England. As an added touch, in Narnia, the white stag would give wishes to the one who caught him. A Newberry Award winning novel titled The White Stag retells the story of Hunor and Magor, highlighting the role of the white stag. It continues to crop up, usually in various fantasy novels, and likely will continue to inspire writers and film-makers for many years to come.

Overview: The elusive and mysterious white stag has been described by those who’ve seen it as radiant, eerie, striking, and even awe-inspiring, so its easy to see how these creatures came by the legendary abilities assigned to them. Most sightings have occurred in Europe, but you never know…you could see the white stag yourself one day.

Chronicles of Narnia: The Last Battle and Eternity