Dragons, sea-monsters, griffins—all these populate various fantastic realms, providing one enduring characteristic of fantasy, its unusual creatures. They may be fearsome, endearing, or bizarre, but they all add color and flavor to fantasy worlds and spark our imaginations with what isn’t…but could be. So in my periodic posts on mythic creatures, I intend to offer highlights on common as well as lesser known animals, assembling a fantastic bestiary.

Appearance: In the medieval era, the unicorn took on its modern form: horse-like with a long spiral horn emerging from its forehead, strong yet elegant in appearance, often white in color and always beautiful. However, in earlier eras, people described unicorns as animals with the body of a deer, cloven hooves, a goat’s beard, and a lion’s tail. They might be colored red, white, or black, with horns of varying shades. A similar creature in Eastern tradition (the qilin/kirin) possessed a coat of scales and a lion-like head from which a single horn protruded.

Unique qualities and traits: Much of the unicorn’s legendary abilities came from its horn, known as an alicorn. The alicorn supposedly possessed powerful medicinal qualities, so during the Middle Ages, enterprising individuals sold narwhal horns as unicorn horns, which people ground up and used as an antidote for poison or a treatment for any kind of disease, or fashioned into a cup which would prevent poisoning. With a reputation of power and 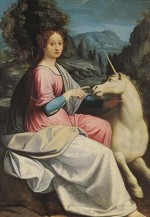 discernment, unicorns were believed impossible to capture, except by a virgin, whose purity would allure them, often to their deaths. They came to symbolize purity and chivalry, power and royalty and even made their way into heraldry of the time.

Sources from myth and legend: No widely-held mythology exists to chronicle the origins of unicorns. In fact, unicorns were one of the

few mythical creatures strongly believed to be real, perhaps inspired by other single-horned creatures. Greek historians, convinced of the legitimacy of unicorns, documented them not in mythology, but in natural history, and Julius Caesar, Alexander the Great, and others in ancient history, told of witnessing them. It was not until the Middle Ages that legends concerning the unicorn became common. The unicorn makes a cameo appearance in Grimms tale, The Valiant Little Tailor, where the perception of power being in the horn is maintained, but the unicorn is portrayed in a rather negative light. In contrast, in The Fair Maid and the Snow White Unicorn, a Scottish legend, the unicorn serves as a friend and companion to a lovely maiden. And most of modern literature depicts unicorns in a positive way, as seen in The Last Battle, where CS Lewis portrays Jewel the Unicorn as a loyal friend, a lordly and noble beast, and a fearsome warrior.

Overview: As a mythical creature, the unicorn has several unique qualities—one, the wide-held belief in its reality, and two, the perception of it as a good creature, not a threat or danger to humans, unlike many other mythic beasts. Over time, it evolved greatly from its origins as a powerful animal with a fierce and noble nature into a more meek and gentle beast. While I wouldn’t go so far as to claim they once existed, I see little compelling reason why they couldn’t have (minus the magical properties, of course).

Your opinions: What do you think—did unicorns ever exist? Or are they pure myth?

What mythic creatures particularly appeal to you? Are there any you would like to see featured here?