Most people have at least passing familiarity with unicorns, griffin, and kraken, but this month I thought I’d highlight a more obscure creature, intriguing for its sheer oddity.

Appearance: Overall, the catoblepas had a more uniform appearance than many mythic creatures–the body of a buffalo and the head of a hog, in size roughly resembling a bull. However, in the incidentals it varied a great deal. Some said protective scales covered it, others said stiff bristles protruded from its head and legs. Certain accounts said it had blood shot eyes, but given the supposedly lethal impact of the catoblepas’ gaze, one might question how the tellers of tales ascertained this fact. One particularly detailed description said that its heavy head hung on a thin neck that was “long and loose as an emptied intestine” (what a metaphor!). By all accounts this was an ugly beast, dark in color, with a head far too large and heavy for its body.

Unique qualities and traits: The catoblepas fed on poisonous plants, and by virtue of its diet, its breath was sharp and foul-smelling, pungent enough to permeate the entire air around it–and poison unto death anyone that inhaled it. Some suggested it would only release its poisonous breath when frightened, others suggested that it knew and enjoyed its power. Not only could it kill people with its poisoned breath, but also with its gaze. Anyone who met the eyes of the cataoblepas would die.  Unlike many mythic creatures, whose bodies were said to have healing or mystical properties, the catoblepas’s unique traits seem confined to its ability to eat poisonous material and not come to harm, and to easily kill with only a glance or a breath. Fortunately for humans, the catoblepas was said to be a slow moving creature and nearly unable to lift its head from the ground. 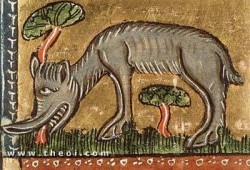 Sources from myth and legend: The catoblepas makes its primary appearance in books of non-fiction from as early as AD 77. Pliny the Elder wrote of it in Natural History, Claudius Aelinius in The Nature of Animals, both suggesting it was African in origin. It never fully disappeared from public record and showed up again in the 16th century, when DaVinci wrote of it in his notebooks. The 16th century novel The New Arcadia also makes mention of it, as does the 18th century novel The Temptation of Sir Anthony. In modern times, it receives the occasional nod in novels or, more commonly, in fantasy games. But by and large, it has faded into obscurity.

Overview: An ugly, noxious, potentially lethal creature, the catoblepas is a beast better appreciated on the pages of novels or tomes of ancient history. It has little to endear itself as a creature of legend, save that it could make an excellent challenge to be thrown into the path of an intrepid explorer or reluctant hero.

Your opinions: How do creatures like the catoblepas gain traction in the pages of history? Is it because they often have real life counterparts? Or because people enjoy inventing the fantastic or embellishing true life accounts to make them more intriguing? Or does it simply reflect the sense of wonder felt when much of the world remained unexplored, and anything strange or marvelous seemed possible?