In the midst of deep wilderness, a strange form loomed, obscured by snow and trees. Travelers stumbled upon footprints, far larger than those left by any normal creature. Strange sounds filled the night air–whistles, grunts, and moans. And so the mythical yeti gained renown in popular culture.

Appearance: Ape-like in build and covered in shaggy hair, yeti possess little beauty and less charm. Legends bestow on the creatures towering bodies (6-10’), enormous feet, and long white or gray fur. In some tales, they have light brown or reddish hair, like their legendary cousin Bigfoot. Most sources agree that their humanoid heads slope up to a point, and a terrible stench pervades the air around them.

Unique qualities and traits: The awkward build of the yeti doesn’t lend itself to speed, but supposedly they have great strength and the ability to travel with stealth through the wilderness. Thick fur gives them the capacity to endure the harsh cold of the Himalayas, where they prowl looking for prey. By way of a weapon, yeti use large stones, which they can hurl with deadly force, and their clawed limbs also provide a means of attack or defense. In addition, some yeti folklore credits them with telepathic abilities. 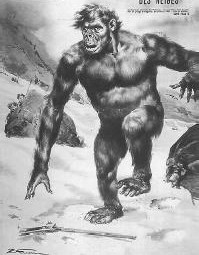 Sources from myth and legend: Some claim that references to yeti crop up in religious poetry and folklore as early as the 4th century BC, but such claims are not well documented. Most accounts do seem to agree that tales of the yeti were passed down by local storytellers for hundreds of years before the creatures began to appear in non-fiction accounts.  In 1832, BH Hodgson recounted his experiences in Nepal in the Journal of the Asiatic Society of Bengal, in which he tells of his guides stumbling across a strange, bipedal creature. Following his account, a number of individuals claimed to see evidence of yeti–footprints, hair, droppings, and actual “sightings” of the creature. Each of these eyewitness accounts described a massive ape-like beast.

In the 20th century, as more outsiders explored the area, reports of yeti sightings grew and began to spread across the western world. In 1921, a reporter invented the term “the Abominable Snowman” to explain the report of “double tracks rather like those of a barefooted man” which the expedition guides said were left by the “Wild Man of the Snows.” Just a few years later, a Greek photographer claimed to see a yeti, “walking upright…it showed up dark against the snow, and as far as I could make out wore no clothes.” With such accounts becoming more common, legends surrounded the yeti gained t 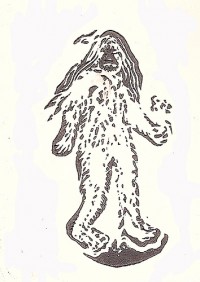 raction, and even gave birth to a thriving tourist industry. More than most mythic creatures, belief in the actual existence of the yeti have continued, pervasive even in recent years. The novelty of the yeti and the very slim possibility of its existence has given fodder to countless storytellers, and yeti have appeared in a number of films, comic books, and novels, often with a starring role as in The Abominable Snowman of the Himalayas.

Overview: One of many “wild man” type creatures, yeti join Bigfoot, Momo, and other strange entities to intrigue hunters of legendary beasts around the world. Though no one has ever proved their existence, many claim eyewitness experiences with yeti. Their accounts succeeded in capturing public imagination and sparking tales that have spanned centuries.

Your opinions: A number of mythic creatures have some sort of charm or compelling traits that contribute to beliefs in their existence. I have to say with yeti, I don’t see the attraction of a giant, hairy, man-like beast. So what makes yeti so intriguing…and leaves so many inclined to believe they exist?