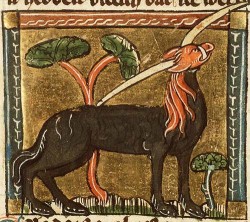 Name: Yale or eale or centicore

Appearance: Roughly the size of a hippopotamus or a large horse, the yale borrowed features from beasts as diverse as a lion and a wild boar. Depending on the legend, its body predominantly resembled either a horse, lion, goat or antelope–most often some odd fusion of all four, with a bit of wild boar thrown in for good measure. Its coloration varied greatly, but its body was often covered in black or tawny fur. However, in heraldry, it often appeared with multi-colored spots dotting its hide. It might have solid hooves, cloven hooves, or heavy paws, but it always had a tail of some sort, usually either tufted at the end like a lion, or long and flowing, like a horse. Occasionally, images show the yale with short stubby nub on its rear instead of a full tail. From its boar-like snout, large tusks often protruded, and two long horns jutted out of its forehead, sometimes straight, other times curved or serrated. 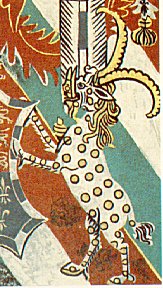 Unique qualities and traits: In descriptions of these horns, the mythic nature of the yale is most clearly seen. According to legend, the horns of a yale could swivel any direction and in battle, one would face forward, the other backward, so if the first was damaged, the second one could be utilized in defense. In the most heated battles, both horns could be employed to defend against more numerous attackers. Some tales even suggest these horns could be rolled up when not in use. Aside from their practical function in fighting or defense, the yale also used its horns to impale its prey–and according to certain sources, demonstrate its mood. Because of its prowess in battle, the yale came to symbolize “proud defense” in medieval heraldry. 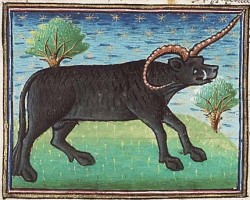 Sources from myth and legend: As with so many mythic creatures, the first written references to the yale came from Pliny the Elder. Describing the yale, he said, “among the same people is also found the animal called the yale, the size of a hippopotamus, with an elephant’s tail, of black or dark brown in color, with the jaws of a boar and horns more than a cubit in length capable of being moved and which in a fight are raised alternately and presented to the attack or sloped backward in turn as opportunity requires.”

For two centuries following Pliny’s account, the yale received little mention, but then it began to appear with increasing regularity in bestiaries and other accounts, eventually finding a place in medieval heraldry. It first appeared in the heraldry of Henry IV’s younger son John, and gradually was put to use elsewhere. In the 15th and 16th century, many prominent individuals with ties to the royal family incorporated the yale into their heraldry, after which it passed once more into relative obscurity.

Overview: Creatures cobbled together from elements of real-world beasts, the yale were endowed with several imaginative qualities, which carried them from the supposedly factual narrative of Pliny the Elder into the pages of folklore and heraldry.

Your opinions: Why do some mythic creatures (like the yale) fade into relative obscurity while others maintain a high profile for hundreds or even thousands of years?