Mythic Creature: The Squonk and Others 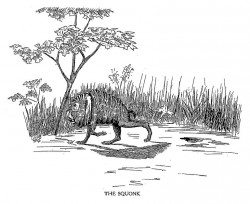 The mythic creatures that first come to mind, beasts like the unicorn, dragon, or sphinx, all have their origins in ancient or medieval cultures. Relatively new civilizations like ours in America frequently get overlooked, yet we have our share of unusual folkloric beasts. While they may not have become as ingrained in popular culture, they represent unique facets of the American experience.

In 1910, William Thomas Cox wrote a field-guide style book entitled Fearsome Creatures of the Lumberwoods, with a Few Desert and Mountain Beasts, which became much-used resource for American folklorists, inspiring and becoming integrated into many other books over the following century, including Mythical Creatures of the North Country, Fearsome Critters, and Giants, Monsters, and Dragons: an Encyclopedia of Folklore, Legend, and Myth. As the title suggests, the creatures Cox discussed found their origins almost entirely in lumber camps and forests and reflect the culture there.

Rather than highlight a single creature, I thought I’d mention a few:

Squonk (Lacrimacorpus dissolvens) – a shy, mournful creature, relatively small, with hideous warty skin (the cause of its sadness). The squonk wept constantly, and hunters would track it using the trail of tears it left behind. In times of crisis, it might literally dissolve into a puddle of tears and bubbles. 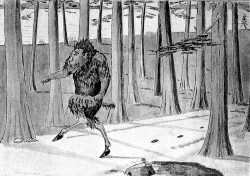 Tote-road Shagamaw (Bipedester delusissimus) – a large creature with the forefeet of a bear and the hindfeet of a moose, the shagamaw bewildered many a tracker, for it would invert itself every 80 rods, alternating which feet it walked upon. This unusual habit resulted in confusion and dispute among woodsmen.

Central American whintosser (Cephalovertens semperambulatus) – a born trouble-maker, the whintosser was a small but mean beast. Its head and tail were attached to the body by a swivel, which enabled them to turn up to 100 revolutions per minute. The whintosser possessed three sets of legs, jutting out at all angles, which made it a stable creature even in unsteady, earthquake-prone terrain. The only way to kill the long-lived animal was to put it into a pipe so that each set of legs would touch a different surface. In the attempt to walk three directions at once, it would tear itself apart.

Roperite (Rhynchoropus flagelliformis) – a unique bird-like animal inhabiting the Sierra Nevadas. Its beak had the form of a rope, which it used to ensnare its prey and drag them to their deaths. The roperite possessed great speed that allowed it to overtake any creature it pursued, making it a terror to other small beasts.

If these creatures capture your fancy, you’ll find both Fearsome Creatures of the Lumberwoods and Fearsome Critters available to read in full online, with many other strange beasts in the mix, such as the snipe (which I heard stories of growing up). The pictures alone reveal inspiration for many of the creatures, and I’m sure the noises in the dark forest enabled heightened imagination and inventiveness. Besides, such beasts provided an excellent way to scare naive “green-horns” and Fearsome Critters (a book dedicated to “To those who have held the bag on a Snipe hunt, who have jumped sideways at the call of the Treesqueak, who have studied the trail of the Side-hill Gouger, and who perhaps have had a ringside seat at a Badger fight”) describes the process two lumberjacks might have gone through in their storytelling to make it seem all the more real.

The US has a wide variety of mythic creatures, and these provide a sampling from a distinct era and culture. Can you think of others? Are any of these particularly interesting to you?

Origins of Rapunzel (Part One of Four)

Dragons of the Valley Winner