Appearance: An amphibious creature, the njuggle appeared in the form of a horse or pony with a greenish mane and a wheel-like tail, which it would hide between its back legs to conceal its identity from unwary humans. Its soft fur ranged in color from grey to black to brown, and it possessed striking beauty. Some legends describe it with a luminous tail and flaming eyes, others with a slightly more ordinary features.

Unique qualities and traits: As befitting a consummate mischief maker, the njuggle spent its time playing pranks on humans. It roamed the seashore or footpaths near lochs and burns, appearing saddled and bridled and acting tame and friendly. Humans careless enough to mount the lovely creature would find themselves taken on a wild ride into the nearest body of water, where they received a good drenching (and occasionally drowned). After dunking its victim, the njuggle would disappear in a blue flame or a cloudy vapor, ready to find its next quarry. While some accounts suggest a more malicious bent, most agree they were more prone to trickery than actual spite, and their escapades were influenced by mercy. The Shetland millers might have felt otherwise, for not only did njuggles work their mischief on humans, they also tinkered with watermills. According to most folklore, watermills of all sorts fascinated njuggles, and they would creep into the “underhoose” and grab hold of the “tirl” which kept the millstones turning. The only way to force a njuggle to move on and allow the mill to become operational again was to send a flaming brand down the millshaft, frightening away the creature. 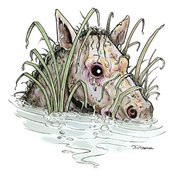 Sources from myth and legend: Shetlanders have a rich collection of folklore, populated with all sorts of mythical creatures, the njuggle not least among them. Their rich oral storytelling ensured that the tales of njuggles made a lasting impression on the populace, over time traveling beyond the Shetland Islands to Canada, where it would come to be known as the nogle. Various magazines and books from the 19th century contain accounts of personal encounters with these creatures in mills or on water byways, as seen in The Living Age, written in 1881, which provides this report: “The man is a very worthy, “decent” man (as they call a sensible, well-behaved person here), and well known to me from childhood. But I certainly never would have supposed that he believed in the “Njuggle” had we not accidentally come on the subject. He told me that, when a young man, one night his sister and he were coming down a “burn,” each carrying a lightened brand to show them their way…some sparks from their brand blew into the water, and that moment, “a creature like a Shetland horse” rose in the middle of the burn, rushed down stream, straight out of the mouth of the burn, and away into the sea; and they saw it vanished therein. Then they knew it was the Njuggle, because when fire touches the water, he rushes off. My informant had a friend who one night was grinding in his mill. Suddenly the mill stopped. He suspected it was the Njuggle, and slipped a lightened brand down the shaft-hole of the mill. When it touched the water, the wheel went round again, as before, the Njuggle having let it go.” Over time the stories began to appear in written folklore collections as well, as outsiders began to study the lore of the Shetland Islands. Now they make an occasional appearance in fiction, as in the Shetland children’s book Da Peesterleeties and Da Curse of Da Njuggle and provide a spark of interest to tourists of the islands.

Overview: The njuggle, a lovely, impish water-horse might indulge in trickery and prank-playing, but rarely caused lasting harm. It provided fodder for many a well-spun tale and material for cautionary warnings to many a child, stories no doubt lent credence by the wide-spread existence of real-life Shetland ponies, each appearance a possible njuggle sighting.

What Types of Fantasy Do You Read?