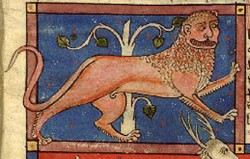 Appearance: Imagine a beast with the body of a lion, red in color (like blood, some claimed) and the head of a man, with an enormous mouth, stretching ear to ear and ringed with three rows of teeth (like a shark). For thousands of years, travel accounts, books of science and history, and regional stories have described the manticore in this fashion. While they mostly agree on the core elements of the manticore’s appearance, the incidentals vary greatly. Sometimes the manticore has horns or wings. Occasionally, tales describe it  as possessing the tail of a dragon, but more often, the tail of a scorpion with the capacity to shoot poisoned barbs. A manticore might have the feet of a dragon or of a lion, and, oddly enough, human-like blue or grey eyes.

Unique qualities and traits: By all accounts, to encounter a manticore meant certain death. Folklore credits it with the ability to devour a man whole, bones, clothes, weapons and all, leaving no trace behind. As a result, in certain regions, when individuals disappeared without a trace, people considered it proof of manticore existence…with the unfortunate lost ones presumably eaten whole. The manticore moved swiftly and with great power, killing its prey with poison spikes shot like arrows from its tail, with its scorpion-like sting, or with its dreadful teeth.  It was known as a cruel creature, deadly and dangerous, a born hunter that hungered after men above all else. Not surprisingly, people held this beast as a symbol of ill omen and tyranny, or even of the devil, so it never became popular in heraldry. 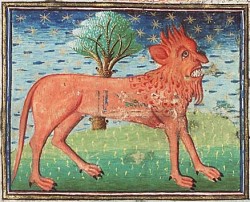 Sources from myth and legend: The first manticore stories came from ancient Persia and began to weave their way into Western culture as early as the 5th century BC, through the writings of a Greek physician, Ctestias. Over the years, the tales became wide-spread, aided in the early days by Pliny the Elder’s vivid description in Natural History, and later, in the Middle Ages, by discussion in The History of Four-footed Beasts and Serpents by Edward Topsell and On the Order of Things by Bartholomaeus Anglicus. Despite many references in books that were considered factual and scientific, even early in the legend’s history, some claimed the manticore was merely an exaggerated version of man-eating tigers, fearsome certainly, but not nearly so terrifying as a manticore. 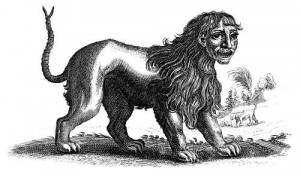 Over the centuries, the manticore has proved enduring, appearing in various bestiaries, and more recently, in works of fiction, from Madeline L’Engle’s Many Waters to a madrigal fable written by Gian Carlo Menotti entitled The Unicorn, The Gorgon, and the Manticore. In keeping with the threatening qualities attributed to it, the manticore usually receives a negative depiction, though in Menotti’s fable, its role is more neutral–a shy, retiring creature who causes harm unintentionally.

Overview: A man-slaying monster, the manticore stirred fear in the hearts of those who believed the legends…and perhaps even a little in those who claimed otherwise. Like many mythic creatures, it may have received some inspiration from real-world beasts, but was enhanced with mythic, larger-than-life qualities. I can imagine the warnings issued hundreds of years ago to unwary travelers–don’t go wandering in the forests, you might get eaten by a manticore…and never seen again!

The Miracle of Mercy Land