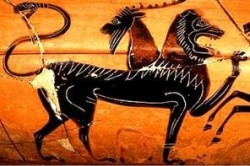 Appearance: Awkward in appearance, the chimera possessed three heads–that of a lioness, goat, and snake. The lioness head came first, sometimes depicted with a close-cropped mane, other times with rays or flames surrounding it. This head breathed fire. Then in the middle of the chimera’s back, a horned goat head emerged. In some descriptions, the goat’s head faced forward, in others it was backwards. Occasionally, artists even depicted a goat’s forelegs and udders as part of the beast. The chimera’s hindquarters were dragon-like and its tail ended with the head of a dragon or a snake. Homer described it as “a thing of immortal make, not human, lion-fronted and snake behind, a goat in the middle, and snorting out the breath of the terrible flame of bright fire.”

Unique qualities and traits: Unlike many mythic creatures, the chimera was one of a kind, not a species of beast. It was also universally viewed as female. The chimera possessed strength and speed, by means of which it ravaged the countryside in which it dwelt. It destroyed herds and burnt sections of land, holding the countryside captive in fear. The appearance of the chimera was considered an ill omen and a sign of natural disasters to come, especially volcanoes. Over time, the chimera came to symbolize evil–female evil in particular. In the medieval era, it was sometimes used to illustrate and support negative views of women, as seen in the Malleus Maleficarum (a treatise against witches). This book denounced women in general, attributing to them all manner of carnality and wickedness, and comparing them to chimera, “You do not know that woman is the Chimaera, but it is good that you should know it; for that monster was of three forms; its face was that of a radiant and noble lion, it had the filthy belly of a goat, and it was armed with the virulent tail of a viper…a woman is beautiful to look upon, contaminating to the touch, and deadly to keep.” 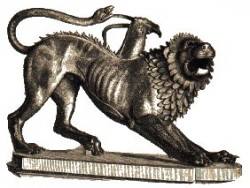 Sources from myth and legend:
The earliest written record of the chimera comes from Homer, in The Iliad, and one of his peers Heriod, who described the chimera in his epic poem Theogony as “a creature fearful, great, swift-footed and strong, who had three heads, one of a grim-eyed lion; in her hinderpart, a dragon; and in her middle, a goat, breathing forth a fearful blast of blazing fire.” Their descriptions provided the standard for the chimera, which became a common figure in Greek mythology. Legends state that Bellerophon, a Greek hero, riding Pegasus, eventually managed to kill the chimera from the air. By the time four or five centuries passed, most people did not believe the chimera’s existence, viewing it as a creature of myth, rather than one that might plausibly dwell in Lycia. In the 1st century AD, Pliny the Elder gives an account that may provide some explanation of the chimera’s origin, “[in Lycia] is Mount Chimaera, which sends forth flames at night, and the city-state of Hephaestium, which also has a mountain range that is often on fire.” On this mountain lived all three of the creatures that make up the chimera, which may have provided inspiration for the legend or at least the association of the creature with volcanoes. I 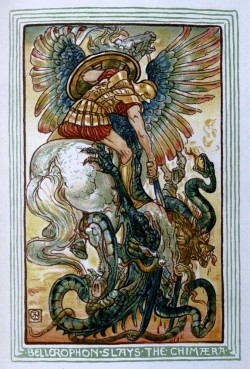 n the medieval era, there were a number of references to the chimera, mostly negative, as seen in the Malleus Maleficarum, and in the 1800s the chimera became a legend of interest (along with other areas of Greek mythology). In 1852, Nathaniel Hawthorn recorded the story of Bellerophon, Pegasus, and Chimera in “A Wonder-Book for Boys and Girls,” and it has appeared in a variety of storybooks and mythology collections since.

Overview: A hideous combination of existing creatures, infused with mythic qualities of strength, speed, and fire-breathing, the chimera provided rich fodder for storytellers as early as the 8th century BC. Despite the fact that belief in its existence quickly dwindled, it had lasting impact as a symbol, making its way into fiction and non-fiction accounts, providing a cultural reference, and eventually turning from a symbol of evil to an example of an absurd fancy.

Your opinions:
What caused the chimera to endure as a symbol long after any belief in it faded? Does anything in particular about the creature catch your interest?

On Heroes and Perseverance