Appearance: A stocky creature, the alpyhn blends characteristics of lions and wolves with unique features of its own, its long, knotted tail perhaps the most distinctive. Most often, the tail was twisted into three knots, giving it a Celtic appearance. The alphyn’s white coloration, brightened by golden tufts and foreclaws, would have given it a regal appearance if the tufts didn’t stick out all over the body, with little rhyme or reason. The tufts combined with a long, pointed tongue often depicted hanging from its mouth gave the alphyn a quirky look. Depending on the artist’s depiction, it might have eagle, dragon, or goat forelegs, and sometimes it bore the scales of a dragon coat its chest and belly.

Unique qualities and traits: Some tales suggested that the alphyn could breathe fire, perhaps due to the dragon-like chest and forepaws. It seems also to have a reputation of fierceness which allowed for its use on banners of war, but like the origin, what exactly it symbolized remains vague. Strangely enough, the alphyn appeared in medieval chess sets in place of the bishop figure. These alphyn were described as judges, which could imply that imputing justice was one of the alphyn’s traits. 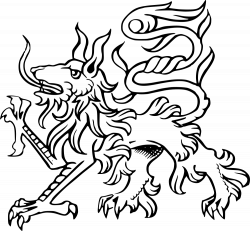 Sources from myth and legend: The alphyn sprang into being during the medieval era, a time when many blended creatures first appeared in heraldry. Unlike many mythic creatures, the alphyn was apparently designed purely for heraldic purposes, but the exact origin remains unknown. It appears a bit like cross between a heraldic tiger and a griffin, suggesting they may have played a role in its conception.

A Lord de la Warr first incorporated the alphyn in his heraldic badges, but how he came to invent or borrow such a creature remains a mystery. As befitting its origin, the alphyn appears in many directories of heraldry and books exploring coats of arms, but typically not in medieval-era bestiaries.

Overview: Sometimes mythic creatures used in heraldry were based on figures believed to exist, other times they appear to have been invented solely to convey some sort of symbolic impression by blending characteristics of different real-world animals. The alphyn appears to fall into this category, a figure of strength that could hold its own in battle or sit in judgment over enemies.

What Makes a Scene Memorable?