Mysteries from the Ocean Depths

Fantastic in the Everyday God 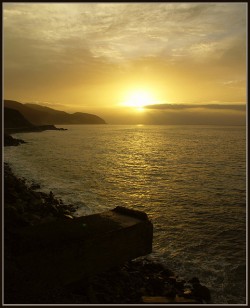 In the ocean depths, scientists have captured unusual tones, almost as otherworldly as the singing planets.  Some sounds rumbling through the ocean have a reasonable explanation–earthquakes, volcanoes, or sea animals–but the origins of other noises captured in the Vents program for underwater acoustics remain undiscovered, mysteries that may remain so forever. Each sound in this uncanny array has received a name:

The Bloop (click through for recording), while not extremely impressive, intrigues me because scientists say it’s characteristic of the sound a massive deep sea creature, larger than any yet discovered, would produce. Some suggest a huge squid-like or octopus-type creature (kraken, anyone?), though it’s uncertain a cephalopod could actually emit such noises. Still, everyone agrees that it’s biological in origin.

Slowdown and Julia sound rather like distressed moans, reminding me of the Scripture that refers to the earth groaning. It’s just interesting to consider the groanings of creation might be literal, rather than figurative, even if we don’t hear them in our daily lives.

The Train resembles its name, shrilling like an underwater train whistle. I’d love to see what creature or natural structure releases such a sound.

Last and perhaps the strangest one recorded in the Vents program, is the Upsweep, which has some semblance to a siren.

The natural world continually reminds me of the creativity of God–that for his good pleasure, he created things we wouldn’t discover for thousands of years (as well as many mysteries we have yet to unravel).  I never tire of hearing new curiosities revealed in the world around us, for each glimpse into these wonders both intrigues and sparks creativity.

Do you find story inspiration in unusual real world phenomenon?

Any theories on what released these unusual sounds?

The Argument Against “Christian Horror” (a Response) by Mike Duran