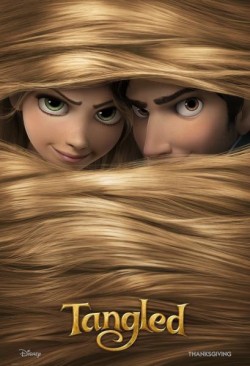 Rapunzel has received its share of modern renditions–everything from novels to plays–which provide different angles on the story, changing perspective, emphasis, or even key plot elements to create new tales infused with elements of the old stories. Since I don’t have personal familiarity with the many novel versions of Rapunzel, I though I’d highlight the most recent film retelling–Tangled–and discuss some of the elements differing from and complementary to early versions, which will provide perspective on the ways fairy tales evolve.

Tangled preserves the core element of all Rapunzel stories–a maiden locked in a tower through no fault of her own and yearning for freedom. As in many of the early versions, Rapunzel is imprisoned by a parental figure (Mother Gothel) who acts according to her own selfish desires, rather than in the best interests of her ward. In addition, Tangled offers the lovely happily ever after ending characteristic of this story.

However, while these central features remain, many other aspects change. Some of the film components pay homage to the early versions of Rapunzel, but place them in different context. There’s a coveted plant (in this case a flower from the sun with healing and restorative powers) that begins all the disruption, only it’s not Rapunzel’s birth mother craving it, it’s Mother Gothel, who uses the plant to artificially preserve her youth and beauty. Yet Rapunzel’s mother is deathly ill and needs the plant to survive. After she drinks an infusion made from the flower, she receives restored health and her daughter acquires an unusual ability–hair that  brings healing and restoration. In echoes of the early stories, Mother Gothel feels what is rightfully hers has been stolen. Determined to regain the powers she craves and the beauty she lost, she steals baby Rapunzel to raise as her own.

Other elements, such as Rapunzel’s tears, also pay tribute to earlier versions.
In Grimm’s Rapunzel and others, her tears restore the sight of her love after he has wandered blind and suffering for many years. In fitting acknowledgment, Disney used Rapunzel’s tears to restore her love (Flynn) to life.

In these and many other ways, Disney borrowed from the literary and oral versions of the tale that date back hundreds of years ago. However, they added their own unique twists. Unlike the original stories, in Tangled, Rapunzel’s true parents want what’s best for her–they’ve been removed from their role as weak, selfish individuals and cast in a positive light, as loving parents who cherish their daughter. This change benefited the story and heightened the contrast between her birth parents and Mother Gothel, the villain of the tale–a manipulative, self-centered woman. In addition, Disney performed a royal role reversal. Rather than having Rapunzel’s love interest be a prince, and Rapunzel herself a woman of common origins, she became a princess and her love interest a thief. This provided an enormous boost in tension, as Flynn has abundant issues of his own that threaten their happily-ever-after, and ultimately seemed a good choice. Of necessity, these changes altered much of the central plotline, but not to the extent that their rendition became unfamiliar.

In addition, Disney brought in a humor element lacking from the original story and emphasized certain thematic elements that weren’t especially prominent in early tales, such as sacrificial love. All these changes served to make Tangled a family-friendly story rather than a social commentary aimed at an adult audience. Overall, I felt they did an excellent job re-imagining the storyline. Several key aspects of the original made their way into the film, and the additions and alterations flowed seamlessly. Such is the timeless nature of fairy tales that they remain identifiable over centuries and hold up to a variety of adaptations and reinventions. I’m glad this one made it’s way to the screens.

Have you seen Tangled? If so, what did you think of it? I’d also love to hear from anyone who has read a novel-length retelling of Rapunzel worthy of recommendation.