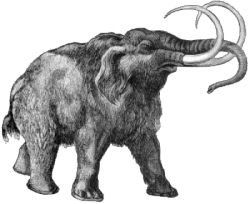 Recent reports that sound more like excerpts from a science fiction novel than a factual account chronicle scientists’ endeavors to resurrect the woolly mammoth by cloning (Jurassic Park, anyone?). Different plans related to resurrecting the mammoth have been in the works since 1997, but in the last few years scientists have taken significant ground. A team of researchers in Japan discovered a way to extract usable DNA from frozen cells. Performing an small-scale experiment with a mouse body kept in conditions similar to Russia’s permafrost zone, where many mammoth carcasses remain, the researchers successfully extracted cell nuclei, implanted it into an egg with which they impregnated a live mouse. They ended up with a cloned baby.

They would use a similar technique to bring back the mammoth. Unlike many extinct animals, quite a few mammoth carcasses have tissue remains possibly sufficient for use in cloning, and as with the mice, scientists would extract the cell nuclei and implant it into an egg–this time that of an elephant, the closest living creature to a mammoth. The elephant would serve as the host mother for what scientists hope would be a live baby mammoth. The team aims for a success story within the next five years.

Aside from the intrigue of such an idea, what purpose would resurrecting the mammoth serve? Scientists primarily want to study why the beast became extinct–and prove that such a feat can be accomplished. But what are the implications of their actions? The mammoth isn’t physically suited to today’s environment, and no one knows what kind of care it might need. Most likely, it would remain in a zoo or research center and would, at best, live its life as a test case for study.

The practical pitfalls that may arise pale in comparison to the potential ethical issues of cloning–a slippery slope for scientists to travel down. In theory, the idea of witnessing an incredible animal like the woolly mammoth living and breathing has intrigue, yet I question both the practical and moral implications of the process. What do you think? Is this a brilliant idea or sheer folly? Should cloning of animals ever take place? Does it matter?