When I think of moon lore, my thoughts immediately travel to the man in the moon, a figure who has managed a varied and illustrious career through the years. He’s usually depicted as a man walking with a large burden on his back, sometimes accompanied by a little dog. 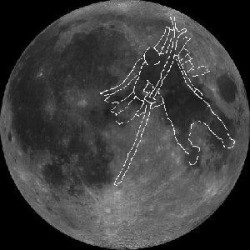 So how did the man get in the moon? Many legends propose theories. In German folklore, the man in the moon broke the Sabbath by cutting sticks. When reprimanded, he scorned the one who delivered the reprimand. As a result he was banished to the moon to bear his burden for all eternity, living in a perpetual “moon-day” as a warning to others who might break the Sabbath. The theme of the man receiving a sentence of eternal labor or banishment to the moon for committing some crime occurs in stories from many other cultures as well, as in this translation of a Middle English poem. An alternate series of legends suggest the man laboring on the moon is Cain, banished from earth for his sin, though such a tale fails to equate with the Biblical account.

Regardless this beleaguered figure presents quite a different picture from the cheery moon face depicted in nursery rhyme books, often chronicled enacting absurdities, such as in this rhyme:

The Man in the Moon
Came tumbling down,
And asked his way to Norwich;
They told him south,
And he burnt his mouth
With eating cold pease-porridge.

Whether a tragic, absurd, or merely intriguing figure, the man in the moon has made an appearance throughout world folklore and will doubtless continue to take on new forms as imagination invents new guises for him.

However, when I look at the moon, I don’t see a man there. Do you? Stop back on Friday and I’ll tell you what I do see.

Tags:
moon folklore / the man in the moon