On the autumnal equinox this year, we had a “Super Harvest Moon”—a harvest moon that rose the exact time the sun set, creating a 360 degree twilight effect. Sadly, I did not witness this because clouds completely shadowed the sky, but regardless, autumn shows off some spectacular full moons. So I thought this week I’d explore a bit of myth and lore connected to the moon. 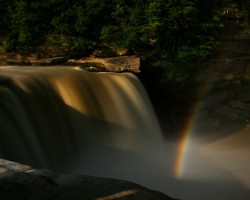 But first, I’d like to mention the real-life phenomenon of moonbows.

Just as the sunlight refracting and reflecting off rain, fog, or mist produces rainbows, so moonlight produces moonbows, also called lunar rainbows or white rainbows. Only a full or nearly full moon reflects enough light for a moonbow, and though moonbows contain the full range of color, they frequently appear a misty silver or white arc, because the faint light can fail to trigger color receptors in the human eye. However, when photographed with long exposure settings, the colors pop out in all their vividness, revealing what lay hidden there all along. 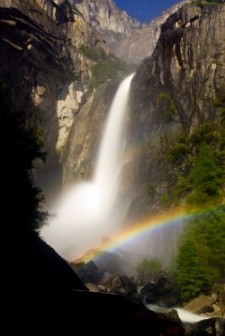 ere’s what a witness had to say about moonbows: “Lunar rainbows or spray-bows also abound in the glorious affluence of dashing, rejoicing, hurrahing, enthusiastic spring floods, their colors are distinct as those of the sun and regularly and obviously banded, though less vivid. Fine specimens may be found any night at the foot of the Upper Yosemite Fall, glowing gloriously amid the gloomy shadows and thundering waters, whenever there is plenty of moonlight and spray. Even the secondary bow is at times distinctly visible.” (John Muir, 1912)

Certain places in the world often display moonbows—Cumberland Falls in Kentucky, Victoria Falls in Africa, as well as several locations in Hawaii. But all that’s truly required is a bright moon and water suspended in the air, so you could see one anywhere. And now that I know they exist, I’ll certainly be looking…

Have you ever witnessed a moonbow? If not, what’s the most spectacular lunar sight you have seen?