Rather than pick one topic about the moon for today’s post, I offer a random sampling of moon related sayings, history, and lore for your consideration…and a little about why the moon has meaning to me. 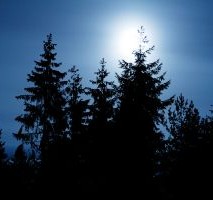 Once in a Blue Moon
You’ve probably heard the saying “once in a blue moon” countless times, but may not know such a thing actually exists—in several forms. A blue moon can refer to the third full moon of a season with four full moons, the second full moon in a month, or a visibly bluish moon (which may occur because of ash or other pollutants in the sky). Taking all these definitions into account, a blue moon may happen more often than the saying suggests.

A Moon by Another Name
Certain Native Americans tribes named each full moon, which helped give them a calendar of sorts.  Different groups invented their own names for each moon, such as pink moon, sprouting grass moon, or fish moon for April, or buck moon or thunder moon for July. Some of these terms, like harvest moon or hunter’s moon, remain in our culture today.

The Moon in Folklore
The moon often plays a kindly role in fairy tales and folklore. In How the Sun, Moon, and Wind Went Out to Dinner, the sun and wind neglected their mother, who in the random fashion of many fairy tales is a distant star, but the moon remembered her and brought her home some food, and thus received a blessing “henceforth you shall be ever cool, calm, and bright.” In a different tale, The Enchanted Pig, a young woman in search of her husband wanders to the house of the Moon, where the Moon’s mother takes her in and gives her refuge while she labors to deliver her baby.

The True Wonder of the Moon
While legends, lore, and obscure facts may give interesting fodder for entertainment, they pale in comparison to the reality that the sun, moon, and stars do the bidding of God and pay tribute to his splendor, as the Psalms declare:

This is what I see when I look at the moon—a reflection and reminder of the greatness of God’s glory and beauty. And a little bit of awe that he chose to make the moon in all its loveliness for us to enjoy.

I’ll leave you with this to consider:
Behold, even the moon has no brightness [compared to God’s glory]. – Job 25:5, AMP

Should Books Ever Be Banned?