“The first tree she looked at seemed at first glance to be not a tree at all but a huge man with a shaggy beard and great bushes of hair. She was not at all frightened: she had seen  such things before. But when she looked again, he was only a tree, though he was still moving. You couldn’t see whether he had feet or roots, of course,  because when trees move, they don’t walk on the surface of the earth; they wade in it as we do water. The same thing happened with every tree she looked at. At one moment they seemed to be the friendly, lovely giant and giantess forms which the tree people put on when some good magic  has called them into full life: next moment they all looked like trees again. But when they looked like trees, it was like strangely human trees, and when they looked like people, it was strangely branchy and leafy people–and all the time that queer lilting, rustling, cool, merry noise.” 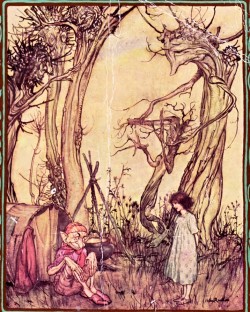 Tree-people or trees with human-like characteristics have a long history in fantastic lore, and it’s no surprise they make such frequent appearances. Trees have a natural beauty and mystery, often ancient, always changing, and ever intriguing. And when the wind whispers among them, they seem almost to speak.

In fantasy and myth, tree-people exist on a rough sort of spectrum, beginning with trees that have the ability to talk and reason, yet remain rooted in place. Philostratus, a Greek sophist, wrote of the talking elm, which spoke up to intervene in an discussion between sages. And in The Talking Tree, a rather grim fairy tale, a speaking tree keeps assigning an impoverished young girl difficult tasks, promising her wealth and abundant food, which she never receives because she fails to perfectly perform each assignment.

Then we find trees that freely move about, walking across the land in various fashions. The British tale of the Apple Tree Man portrays a kindly tree-person that dwells in orchards. He that stores treasure under his roots and speaks of it to those he chooses, bestowing his wealth on certain individuals, and then moving on when his deed is done or when he feels threatened.

In Prince Caspian (quoted above) trees walk through land like we might wade through water. In some passages CS Lewis depicted them as dancing and merry, but in others, he shows them going to war–a frightening, almost unstoppable threat to their foes. In contrast, Tolkien’s huorns never display joy. They’re a wild and dangerous bunch of entish trees or tree-like ents. No merriment among them, only menace and danger when they walk through Middle Earth. They speak also with voices only the Ents understand, though it’s implied that others might gain understanding if given enough time.

Tolkien also created Ents, the “shepherds of trees,” that are perhaps the closest to human than any other tree-like race. They speak, reason, move about, and have a specific purpose–tending to the trees in their care. They don’t entirely resemble trees or humans, but some fusion of the two, with their own unique traits and abilities.

George MacDonald also wrote of a being somewhat similar to the Ents in her human capacities, but a stark contrast in her malevolent nature. This alder-tree maiden possessed  an allure that could make her “terribly beautiful” and a temptress to many a man, but in reality she was a “strange horrible object…a rough representation of a human frame, only hollow, as if made of decaying bark torn from a tree.” And with her deceptive appearance of loveliness, she lured men to their deaths.

Whether good and kind, dangerous, or even evil, tree-people have appeared in fantasy and folklore for centuries, and they still have a strong presence in today’s fantasy tales. I’ve used classic examples, yet in recent films and novels alike, story-tellers have invented various sorts of tree-people for the entertainment of their readers and viewers…knowing perhaps that when one steps into a forest it’s easy to imagine such creatures being real.

I’d love to hear of any other tree-people you’ve encountered either in book or film.

On Being a Hero