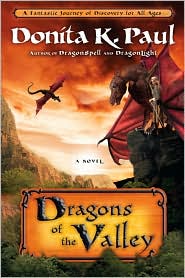 In Dragons of the Valley, ripples of unrest and rumors of war begin to spread across the land of Chiril. To make matters worse, an attempt to protect three important statues formed from one of the cornerstones of the world, instead results in their separation. This separation will cause chaos across the land as unpredictable changes occur in the terrain itself. Tipper and Bealomondore, along with several companions, must manage to get the statues put back together–and in a safe place, where their enemies cannot gain use of them as a weapon–or Chiril may fall.

In the midst of the attempt to get statues to safety, Bealomondore, an artist with no interest in matters of war, receives a call from Wulder to take up the sword and fight. There’s nothing he wants less, but he finds himself thrust into situations where he must fight to defend those around him, or they will not survive. The Sword of Valor given him by Wizard Fenworth trains him as he travels, but will it prove sufficient in the battle against one of Chiril’s greatest foes?

While this story focuses on Bealomondore and Tipper, familiar characters from the first book in the series–Beccaroon, Fenworth, Librettowit, and others–prove valuable allies.  The vibrant secondary characters such as Lady Peg, who exists in a perpetual state of blissful bewilderment, by which she unintentionally foils the plans of her foes, or Fenworth, an absent-minded wizard prone to making light even of the most serious dangers, sometimes steal the show from Tipper and Bealomondore. All in all, the characters serve to make the journey an interesting one.

The story deals with serious matters (invasion, war, and so forth), but the tone remains light-hearted, thanks in part to the characters and their antics, and threads of humor weave through even the dark moments. However, the light-hearted feel doesn’t prevent the tale from drawing out some valuable themes, one in particular worth highlighting–the importance of stewarding the knowledge of God (Wulder, in Donita’s world).

This underlying theme proves an important part of the story. Over the years, Chiril has forgotten Wulder. In the previous book, visitors from Amara brought the knowledge of Wulder to Tipper and her companions and aided in the discovery of Chiril’s Paladin (spiritual leader), but for the most part, the citizens of Chiril have yet to hear of Wulder at all. During their journey, Bealomondore and Tipper discover that the kimens remember fragments from tales of old related to Wulder, and when Bealomodore asks one of the kimen how the knowledge of Wulder was lost, he answers, “The elders say it would only take two generations. If parents don’t teach their children, and they become grandparents and don’t teach their grandchildren, the knowledge is lost. Truth is relegated to legend. Legend becomes myth. Myth becomes fairy tale.” Bealomondore marvels that the lack of testimony–speaking of Wulder and his deeds–could result in so great a loss, through his words depicting the vital importance of declaring the nature and the works of God. As Bealomondore and others regain the understanding of Wulder and begin to follow his ways, they find themselves endowed with courage for the battles they face.

In short, Dragons of the Valley is a rollicking quest, brimming over with adventure and humor both, yet still interweaving threads of deeper meaning throughout the story. If you haven’t read any of Donita’s books, the number of characters and races might be a bit bewildering, but the glossary in the back will go a long way toward eliminating confusion. Stylistically, Dragons of the Valley will most suit a tween or early teen audience, but adults can still enjoy the fun antics and adventures of Bealomondore and his companions.

If you’re interested in reading the book, I’m holding a giveaway which you’re welcome to enter. To hear more discussion of Dragons of the Valley, I encourage you to visit some of the other tour stops:

Book Giveaway: Dragons of the Valley by Donita K. Paul