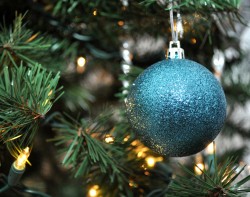 Although every culture observes and celebrates various holiday events, at times fantasy writers neglect this area of cultural development. Yet when developed well, fantastic holidays can communicate much about the values and belief systems of the worlds in which they exist.

Beyond that, the observation of a holiday may have significance to the story itself. If you read some of the peripheral material Tolkien wrote on Middle Earth, you’ll find it has a rich and varied holiday tradition. Yet we see few of those holidays in the books themselves–he wisely elected to describe only those that had direct impact in the tales he told. One of the more prominent holidays he references in The Hobbit is Durin’s Day, which occurred when the sun and the moon both appeared in the sky on the first day of the dwarvish new year. Those of you who have read The Hobbit will know the significance of Durin’s Day held in the adventure of Bilbo and the dwarves.

In a similar fashion, ND Wilson used the celebratory custom of the christening feast to usher in a change that altered the course of his story and the ultimate fate of his characters. This feast resulted in a long-lost father returning home and a son receiving a name that would prove to be his strength. The celebration marked a turning point in Dandelion Fire.

And who could forget the arrival of Father Christmas in The Lion, The Witch, and the Wardrobe? Readers’ hearts rejoice with the Pevensies at this first sign of the Witch’s spell weakening. We share their anticipation as they receive gifts which will enable them to make a stand as the book reaches its climax.

All these authors moved beyond simply revealing something about the culture of their worlds in their portrayal of holidays. They used them to propel their stories forward in meaningful ways. And those of us who write should seek to do likewise, not inventing holidays for sake of doing something different, but rather creating festive occasions that will give insight into the people of our worlds, move our plots forward, and contribute to the journeys of our characters.

Sometimes this will mean developing a complex schedule of feasts and celebrations, other times the story may require few holidays or none at all. As always, it’s about story, and choosing the elements that will strengthen the tale you have to tell.

Have you found any particularly meaningful holidays in the pages of fantasy literature?

Up Wednesday will be a discussion of the sources from which holidays generally spring, which I hope will spark some inspiration.

On the Invention of Fantasy Holidays