As I mentioned in the first post of this series, the role of food in fantasy novels is frequently more than just sustenance. Along those same lines, sometimes a meal shared by the characters serves as much more than a meal–it changes the partakers and those around them or represents the transformation taking place in their world. These meals serve in unique symbolic ro 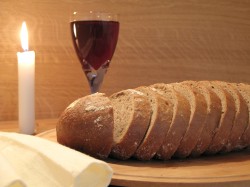 les suited to the individual book, which reach beyond providing comfort, bringing impetus for change, or orienting the reader to the world

In Dandelion Fire by ND Wilson, one such meal takes place, significant both to the protagonist and the climax of the novel (some spoilers in the description, be forewarned). The scene carries strong parallels with Psalm 23, and given that the writer is Christian, such allusions seem intentional. In this meal, the protagonist, Henry York, has just discovered his true identity, amid a deadly battle threatening to overrun his city and destroy his people. The enemy seems to have the upper hand in the fight and intends to bring total destruction, but even as the battle roars on around them, his mother holds a feast for him, the once-lost son. The priest in attendance refers to it as “a table laden in the face of enemies.” This christening feast sweeps away Henry’s false perceptions of his nature, revealing truth,  and after it, he goes forth in the power of his rightful identity. It was a meal with far-reaching impact, even a transformative effect.

Similarly, in The Lion, the Witch, and the Wardrobe, the animals celebrate a Christmas feast with joy, a sign of the White Witch’s power beginning to fade away as they experience the first Christmas in 100 years of unending winter.  It reveals the change transforming the land at Aslan’s return and warns the White Witch of the weakening of her control, and though she lashes out in fury against the celebrating animals, she can do nothing to halt the progression of spring coming. So it is a meal, yes, but also a symbol of change sweeping the land.

Significant transactions and transformations can take place amid something as seemingly simple and mundane as sharing a meal, both on the pages of fantasy novels and in real life. Can you think of other examples of significant meals/feasts in literature?